'No peace' in Middle East without end to Israeli occupation: Abbas

Palestinian President Mahmoud Abbas has harshly rebuked the normalization agreements signed by the United Arab Emirates (UAE) and Bahrain with Israel at the White House, saying that peace in the Middle East region is only possible after Israel’s withdrawal from the occupied territories and recognition of Palestine’s rights to establish a state with East Jerusalem al-Quds as its capital. 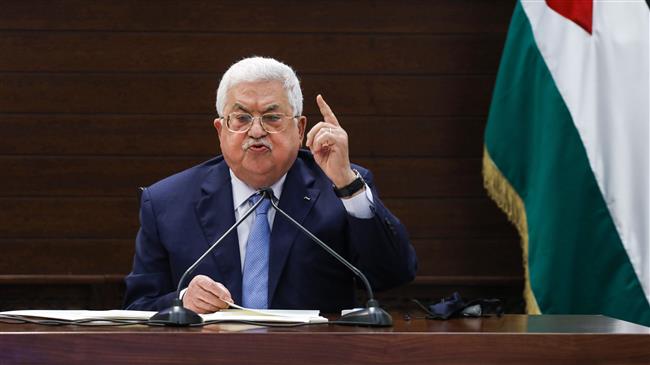 Abbas made the remark in a statement carried by Palestine's official Wafa news agency on Tuesday, shortly after US President Donald Trump hosted a ceremony at the White House to sign agreements aiming to formalize ties between the UAE, Bahrain and the occupying regime of Israel.
The deals were signed between Emirati and Bahraini Foreign Ministers, Sheikh Abdullah bin Zayed Al Nahyan and Abdullatif bin Rashid Al Zayani, and Israel’s Prime Minister Benjamin Netanyahu, with the US president also inking his blessing to the controversial accords.

With the US-brokered deals on Tuesday, the UAE and Bahrain have become only the third and fourth Arab states to ever normalize their relations with Israel after Egypt and Jordan.
The normalization trend has been uniformly panned by all Palestinian people and factions as well as the Bahraini public that have been holding daily rallies since its inception.
Throughout the day, the Palestinian territories of the Gaza Strip and Tel Aviv-occupied West Bank witnessed raucous rallies against the deals, and passionate denunciation speeches and statements by Palestinian leaders and Muslim authorities worldwide.