Acting Minister of Interior Massoud Andarabi said on Tuesday that the use of IEDs is among the new tactics used by insurgent groups, particularly the Taliban. Andarabi's comments came hours after a magnetic IED blast targeted a police vehicle in Bagh-e-Bala in PD4 of the Afghan capital in Kabul, causing no human injuries. 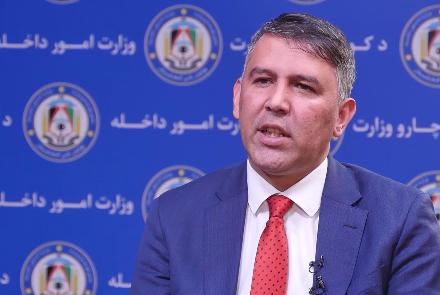 The acting minister said that the IED mines are being made in Kabul, Logar and Maidan Wardak provinces.
Meanwhile, the Afghan security experts have criticized the government’s security policy, saying the government and the security agencies have failed to identify the perpetrators behind the attacks.
Assessments conducted by the Afghan security and intelligence agencies reveal that high levels of dangerous materials such as white phosphorous, ammonium nitrate, and gunpowder are being used in the IEDs.
“This is a new tactic which the enemy is using to spread chaos among the people. In many cases, the Taliban has been behind this. We have undertaken joint operations with the National Directorate of Security and have made many arrests over the past month and a half. Up to 20 to 30 people were arrested,” said Andarabi.
Security agencies said that the insurgents are using metals, particularly nails, nuts and bolts, to make the IEDs more deadly.
“Currently, the armed opponents of the Afghan government use those tactics that harm the opposite side but keep themselves safe. The IED is one of those tactics,” said military expert Atiqullah Amerkhel.
“As I hear, these IEDs are being kept and made in Kabul, but the Afghan intelligence and reconnaissance organs are very weak, many attacks were carried out and many casualties occurred, but they could not find the main plotters,” added Amarkhel.
Mohammad Nasim Ahmadi, an explosives expert, said that all the IEDs used by the insurgents are being made inside the country.
“If the target is big, they use more explosives, but for small targets they use less explosives,” said Mohammad Nasim Ahmadi.
Andarabi said that the IEDs are being made in Kabul, Maidan Wardak and Logar provinces.
Residents in Kabul meanwhile blamed the enemies of Afghanistan for being involved in the IED attacks.
“Of course, it is a matter of concern for all the people. The enemies of Afghanistan, whether they are domestic or foreign, are trying to disrupt the peaceful life of the people of this country,” said Baryalai, a Kabul resident.
“There is the hand of the enemy behind this. Regional and neighboring countries are also involved in this, they want to eliminate those Afghans who are trying to build the country,” said Abdul Shokor, a Kabul resident.
In the latest incident, an IED blast targeted a police vehicle in the Bagh-e-Bala area of PD4 in Kabul on Monday evening, however, the blast did not cause any casualties.
Tags:
Andarabi: Taliban's New Tactic is 'Spreading Chaos' with IEDs
Source : Afghan Voice Agency(AVA)
Tuesday 22 September 2020 16:02
Story Code: 219398 Copy text available
Andarabi to Taliban: “Join Peace or You Will Be Eliminated”
US-Taliban agreement to cut violence will start in next 5 days, Afghan minister says
We Were Aware Of Taliban Attack On Kunduz: Andarabi
ISIS and Taliban are mortal enemies, new date for intra-Afghan talks under discussion: Khalilzad
100 More Taliban Prisoners Released, Total 300
Featured news
Imran Khan: Pakistan Contributing ‘Positively’ To End Violence, Bring Peace To Afghanistan
Blast in Kabul kills three, wounds 12
Peshawar blast: At least seven dead in Pakistan school attack
Saudi funds $10 million program to help returnees and IDPs
4 Negotiators Return Home Empty Handed, Freezing Peace Talks in Doha
Car Bomb Targets Police Special Unit in Khost
1
Atta Noor asks India to ‘engage with Taliban without giving them legitimacy’
2
US Says Death Of Al Qaeda Member In Afghanistan ‘Major Setback’ For The Group
3
Top al-Qaeda leader killed in eastern Afghanistan: Officials
4
Next months decisive for Afghanistan: NATO chief
5
Afghanistan Latest: At Least 30 Killed in Saturday's Blast in Western Kabul
6
6 Killed, 2 Injured In A Militant Attack on Kamal Khan Dam: Nimroz
7
U.S. Defies Taliban Claim of Violating February Accord
8
Pakistan to cooperate with Afghanistan ‘regardless of who is in power’
9
Interim Govt 'Only Solution': Hekmatyar
10
Religious Scholars in Bangladesh Issue Fatwa, Calling Afghanistan War Against Islamic Norms