President Ghani, speaking to the 75th UN General Assembly via video conference on Wednesday night said ” the Afghan people have a clear and urgent priority: a ceasefire. An urgent end to the violence will, more than anything else, give us a chance to progress.” 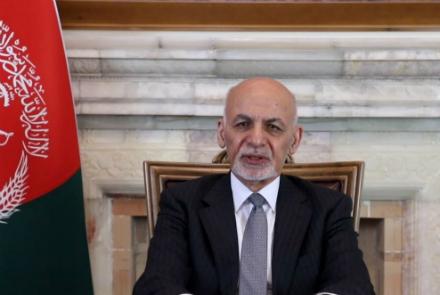 President Ghani said that as a state and society, “we have demonstrated the commitment, compassion and courage to take hard decisions to start direct peace talks with the Taliban.”
Ghani says that the role of the United Nations in standing “for our shared values throughout the peace process is absolutely critical... and we thank the United Nations for their support so far throughout this arduous process. We thank the UN for their call for a global ceasefire.”
“The role of the UN and our international partners and allies will continue to be extremely important as our negotiating team sits across from the Taliban in Doha,” he added.
Ghani also said that for sustainable peace Afghanistan, “we must get to the root of the terrorism problem blighting our region and address it as the global phenomenon, and threat, that it is.”
“We are living, dying inside the 5th wave of global terrorism in which global terrorist networks are closely linked with global criminal networks, making warfare totally unconventional and peace-building even more of a challenge,” he said.
“Violence and warfare have also evolved--an evolution we Afghans have witnessed and suffered in real time,” he added.
On Wednesday, the contact groups from both sides of the Afghan peace negotiations in Doha resumed their discussions.
The meetings lasted for several hours and were aimed at finalizing the procedural rules and regulations for the formal talks, said a member of the republic's team.
But Mohammad Naeem, spokesman for the Taliban's political office in Doha on Wednesday night told TOLOnews that Wednesday's contact group meetings did not yield results, but the group hopes an agreement will be reached.
“An agreement has been made on 18 of the disputed points. Our contact groups today continued their discussions on the two remaining items. The perspectives (of both sides) have come closer; however, they have not reached a final agreement on these points so that we could move toward the agenda of the talks,” said Attaullah Ludin, a member of the republic's negotiating team.
The negotiations in Doha have made slow progress over the last 13 days despite meetings between the contact groups of both sides.
The two sides are discussing 20-article rules and regulations for the peace negotiations.
Tags:
Ceasefire Is 'Urgent Priority,' Says Ghani to UN
Source : Afghan Voice Agency(AVA)
Thursday 24 September 2020 09:43
Story Code: 219479 Copy text available
Featured news
'We Backed US Forces' Presence in Afghanistan': Putin
Religious Scholars Call Current War 'Illegitimate'
‘Regional consensus can drive peace in Afghanistan’
Angry Afghans call for immediate ceasefire after Daesh
21 Gov’t Officials to Face Justice on Corruption Charges
UK’s Halo Trust hires former Taliban fighters to clear mines
1
Taliban will never win: Ghani
2
Two Romanian soldiers wounded in Kandahar IED explosion
3
Atta Noor asks India to ‘engage with Taliban without giving them legitimacy’
4
Taliban attack kills 25 Afghan security personnel
5
Trump says 19 years in Afghanistan enough
6
NATO Presence in Afghanistan Conditions-Based: Stoltenberg
7
Afghanistan says 840 Taliban militants killed in nearly one month
8
Ghani: Ask Mullah Hibatullah Why He Is Killing Afghans
9
Top al-Qaeda leader killed in eastern Afghanistan: Officials
10
Taliban abduct acting district governor in Takhar