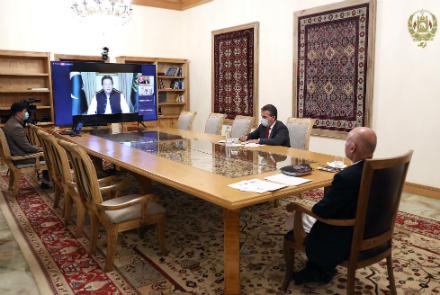 The Palace said that the two leaders discussed relations between both countries and they agreed a ceasefire is needed for Afghan peace, Sediqqi said, who added that Ghani invited Khan for a visit, which Khan accepted.
Pakistan’s Foreign Office in a statement said that “the two leaders exchanged views on (the) Afghan peace process and strengthening of Pakistan-Afghanistan bilateral engagement.”
Khan “reaffirmed Pakistan’s steadfast support to the Afghan peace process and noted the positive results of these efforts culminating in US-Taliban peace agreement and the commencement” of the negotiations between the Islamic Republic of Afghanistan and the Taliban, it said.
Khan emphasized “the importance of all Afghan parties working for reduction in violence leading to ceasefire,” it said.
Khan mentioned that the Afghan stakeholders “must seize this historic opportunity and work together to secure an inclusive and comprehensive political agreement through the Afghan-led and Afghan-owed process.”
“Pakistan will fully support the decisions that the Afghan people will take about their future,” he added.
Khan noted that the Chairman of Afghan High Council for National Reconciliation (HCNR), Abdullah Abdullah, will be visiting Islamabad next week.
This comes as the contact group meetings between both sides of the Afghan peace negotiations in Doha have been stalled for the past two three days. The meetings were aimed at reaching an agreement about the procedural rules intended to guide the formal talks.
The disputed points:
The Taliban demands recognition of the US-Taliban agreement as the 'mother deal' underlying the Afghan peace negotiations, and Hanafi Figh as the sole religious legal guidelines for the talks.
Reports say that the republic's team has suggested alternatives to the Taliban’s demands.
The republic's team has proposed that if a religious issue arises it can be solved based on Hanafi Figh by default, however, the Shia Personal Status Law must be respected, and the choice of religious jurisprudence should be given to other minority groups as well.
Regarding the US-Taliban agreement, the republic team recommended four options:
First option: The terms of the US-Taliban agreement could be accepted as underlying the talks, however, the terms of the joint declaration between the Islamic Republic of Afghanistan, NATO and the US should also be accepted as applicable.
Second option: Neither the US-Taliban agreement nor the declarations of the Islamic Republic of Afghanistan with the US and NATO will be recognized as having any authority, and the negotiations will move forward based on the decisions of the consultative Loya Jirga and the Jirga's declarations.
Third option: Both sides start talks "based on the national interest of Afghanistan."
Fourth option: The Quran and Hadith are the main authority for the talks, replacing all others.
There are no confirmed reports about when the two sides will resume their discussions on the disputed points.
The Afghan peace negotiations began in Doha on September 12.
Tags:
Ghani, Imran Khan Discuss Afghan Peace, Say Ceasefire Needed
Source : Afghan Voice Agency(AVA)
Saturday 26 September 2020 12:15
Story Code: 219576 Copy text available
Featured news
'We Backed US Forces' Presence in Afghanistan': Putin
Pakistan to cooperate with Afghanistan ‘regardless of who is in power’
Religious Scholars Call Current War 'Illegitimate'
‘Regional consensus can drive peace in Afghanistan’
Angry Afghans call for immediate ceasefire after Daesh
21 Gov’t Officials to Face Justice on Corruption Charges
1
Taliban will never win: Ghani
2
Two Romanian soldiers wounded in Kandahar IED explosion
3
Atta Noor asks India to ‘engage with Taliban without giving them legitimacy’
4
Trump says 19 years in Afghanistan enough
5
NATO Presence in Afghanistan Conditions-Based: Stoltenberg
6
Afghanistan says 840 Taliban militants killed in nearly one month
7
Ghani: Ask Mullah Hibatullah Why He Is Killing Afghans
8
Top al-Qaeda leader killed in eastern Afghanistan: Officials
9
Taliban abduct acting district governor in Takhar
10
MFA To Work With Pakistani Embassy To Streamline Visa Process After Jalalabad Stampede