One of the best Tennists in history

Rafa was born on June 3, 1986 on the island of Mallorca (Spain) where – when he isn’t on tour – he still lives at home with his parents, younger sister and extended family in a large apartment building in downtown Manacor. 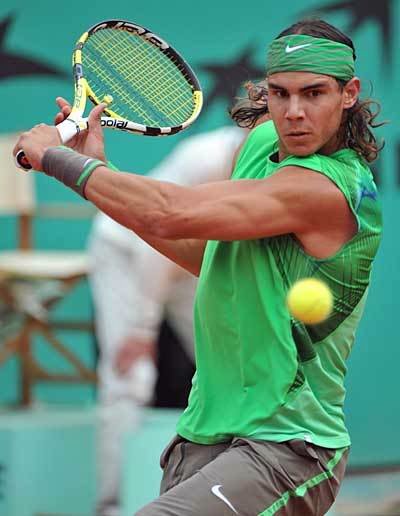 
Unlike many other talented young players Rafa did not have to suffer the stress of leaving home at an early age in order to train at an established tennis academy. His full-time coach since the age of 11 has been his uncle Toni Nadal (a former top 30 Spanish tennis pro) with whom he lives in Manacor; he also credits his friend and mentor, former World #1 Carlos Moya, with helping his early development through many shared training sessions when he was a youngster just starting out on his career.


Rafa’s family seems to have sports in their blood. Besides Uncle Toni, his Uncle Rafael played third division football in Spain and another uncle, Miguel Angel Nadal (nicknamed "The Beast Of Barcelona") played for RCD Mallorca, FC Barcelona and the national Spanish team, making the Spanish national squad at the 1994, 1998 and 2002 FIFA World Cups. There’s no word yet on whether Rafa’s little sister Maribel has discovered a sporting career lurking somewhere in her future but if she does, you’ll read about it here first!


Partly due to the example of his Uncle Miguel Angel, Rafa played as much football as tennis until the age of twelve and was talented enough to seriously consider a football career. As his grandfather recalls: "Rafael was a good attacking midfielder who could play the perfect pass and score goals. He could easily have chosen football but with advice from his Uncle Toni it was decided that he would go further with a racquet in his hand than a football at his feet."


Uncle Toni was certainly right about that. Rafa won his first professional ATP match at age 15 and had broken into the ATP Top 100 before his 17th birthday. He was named ATP Newcomer Of The Year in 2003 and ended the year inside the Top 50, picking up two Challenger titles along the way. But it was in 2005 that Rafa began to attract some serious media interest. Having been sidelined in 2004 with a stress fracture that kept him out of action for much of the season he burst onto the scene seemingly out of nowhere at the 2005 Australian Open, engaging in an attention-grabbing five set slugfest against eventual runner-up Lleyton Hewitt which made the world sit up and take notice.


Not that the notice was all good, however – his unconventional outfit of sleeveless shirt, bandana and trademark below-the-knee "piratas" provoked a firestorm of hilarity from the generally straight-laced TV commentators who ridiculed Rafa for showing up on court "wearing his sister’s pants". His reaction to being the target of so many jokes was telling: he calmly shrugged it off. "I like the piratas - they’re comfortable," he said. "I’m gonna wear them all summer long." And so he did.


By the end of 2005 no one was making fun of his pants any longer. Rafa had shown beyond any doubt that he had the skills, smarts and dogged determination of a champion, scooping up 11 ATP titles including a spectacular Grand Slam debut performance at Roland Garros, where he celebrated his 19th birthday by defeating World #1 Roger Federer in the semi’s on his way to lifting the trophy. He ended the year ranked #2. Pants, schmants! The boy can play.


As we start 2008 Rafa has been ranked number 2 for nearly three years. He's won 23 titles including Monte Carlo, Rome and Roland Garros three years running and has got to the last two Wimbledon finals. In any other era that would have been enough to keep him firmly in the number 1 position but there's always been a certain Roger Federer in the way.


Much has been made of Rafa’s supposed rivalry with Federer. Rafa remains, as always, gracious towards his opponent and unfazed by the media hype. "Tennis is just a game, there’s no reason we shouldn’t be friends off court," he has been heard to say (possibly while waiting at the net for Roger to give him another brotherly belly-rub). But while there’s no animosity towards his rival, Rafa’s competitive spirit is never far from the surface. "Now, he’s the best," he says of Roger. "For the future? We gonna see."


Now in October 2008 Rafa has been confirmed as the year end number one. He has had an astonishing year so far winning 8 singles titles including three Masters Series, his fourth Roland Garros, his first Wimbledon and the Olympic gold medal. People have been saying for a while that he is arguably the best clay court player ever. Four consecutive wins in Monte Carlo and Barcelona, three in Rome, his first in Hamburg and the fact that he has never been beaten in 28 matches at Roland Garros is an incredible record. But now those same people are beginning to suspect that he could even go on to become the best all court player ever.