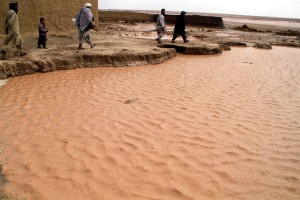 According to local authorities in northern Sar-i-Pul province at least 20 people were killed and more than 30 others are missing following flash floods in this province.

The officials further added at least 15 people were injured and the number of people killed following the incident may rise. The floods have ruined highways, school buildings, mosques and health clinics.

This comes as at least 30 others were killed following flash floods in this province two weeks earlier.

Syed Faizullah Sadat chief of the natural disasters management department said Afghan women and kids were among those killed following the flash floods.

He also said more than 1,000 houses were destructed and more than 50 cattle were also killed.

In the meantime provincial hospital officials in Sar-i-Pul proivnce said they have taken the patients to northern Jowzjan however there are fears that the neighboring regions of Sar-i-Pul province including Jowzjan is vulnerable to flash floods.