With the devastating impact of the ongoing campaign led by the Saudi regime in Riyadh against the impoverished country of Yemen, there has been a constant rise in the cases of malnutrition there, many of them life-threatening. 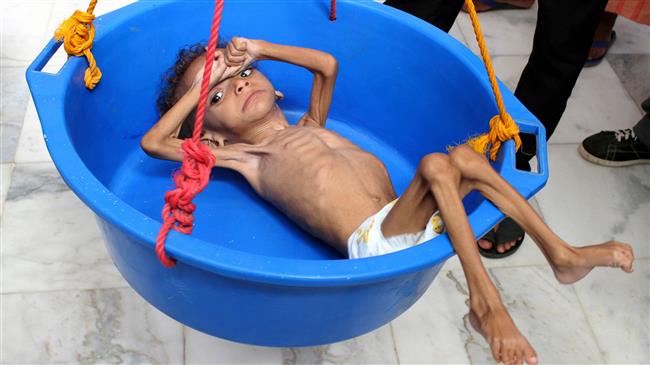 AVA- Sawsan Hussein Hatem Al-Hababi is a doctor with the International Rescue Committee. He spoke at a medical clinic in central Sana’a on Friday, reporting “a significant increase” in the number of cases arriving.
He said that the number had increased “especially after people have been displaced from Hudaydah to Sana’a.”
Hababi said most of the cases that recovered with medical help “have relapsed” because of the economic situation.
Um Abdel Malek, mother of three-year-old Abdel Malek Mastoor who is being treated for malnutrition, said she tried to buy him milk but she cannot afford it.
"If I can, I go out and buy him milk. If I can't, I don't. I can't provide it for him," she said. Abdel Malek is the skinniest of her five children.
According to the United Nations Children's Fund (UNICEF), 1.8 million children are acutely malnourished in Yemen.
Sherin Varkey, deputy representative of UNICEF in Yemen, warned that there was little time to waste for children like Abdel Malek.
“We urge the parties to the conflict to respect international humanitarian law and respect the rights of children. The children have gone through unimaginable suffering over the last three years. The time for peace is now."
Representatives from Yemen’s running government, which is allied to the popular Houthi Ansarullah movement, and the country’s former regime, backed by Saudi Arabia, were scheduled to participate in talks in Geneva on Thursday, but the negotiations are still on hold as Riyadh is still refusing to allow the Houthis to fly to the Swiss city.
The former Yemeni government resigned in 2015 as the country was experiencing political turmoil.
The head of that government, Abd Rabbuh Mansur Hadi, fled to Riyadh after resignation. There, he encouraged Saudi plans to launch attacks on Yemen, where the Houthi movement had taken over state matters in the absence of a functioning government.
A Saudi-backed coalition soon invaded the Arab world’s poorest nation in an attempt to reinstall the former Riyadh-friendly officials to power despite their resignation. The kingdom has also imposed an all-out blockade on Yemen, which according to the UN is now the scene of the world’s worst man-made crisis.
The war has unleashed a humanitarian and economic crisis on the already impoverished country.
Thousands have been killed in the Saudi-led invasion, and the country has been pushed close to the edge of famine. A cholera outbreak, resulting from the devastation of Yemen’s health infrastructure, has also claimed more than 2,000 lives.