American journalist and political commentator Don DeBar believes the New York Times – “one of the most Zionist rags on the planet” -- is trying to compel US President Donald Trump to apply “maximum pressure” on Iran in order to start war with the country. 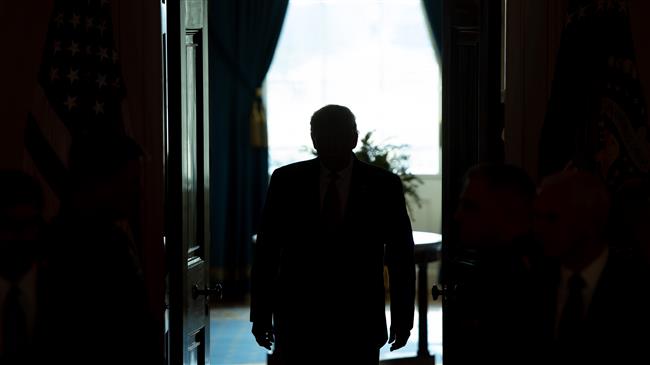 DeBar made the remarks in an online interview with Press TV on Saturday while commenting on a New York Times opinion piece that backed Trump’s economic terror on Iran, a hostile agenda that flagrantly breaches international law.
The Times article is written by Richard Goldberg who served on President Trump’s National Security Council.
The Times wrote on Friday that Trump’s “maximum pressure (is a way) to gain maximum leverage ahead of negotiations to dismantle its nuclear program and address its malign activities (sic).”
“Many wrongly believe the United States has already reached full ‘maximum pressure’ on Iran. In truth, several critical pressure points remain untapped,” the newspaper wrote.
“The administration this month rolled out fresh sanctions targeting Iran’s construction, mining and manufacturing sectors, along with the first step in a crackdown on violators of American sanctions on Iranian metals and petrochemicals. Sanctions targeting Iranian state shipping lines are set to take effect in June and could be expedited for more immediate impact,” it added.
It continued, “Another potential target: Iran’s financial sector in its entirety. In 2018, Senator Ted Cruz of Texas, and Representative Mike Gallagher of Wisconsin, proposed legislation imposing sanctions on Iran’s financial sector, which the United States recently determined to be a ‘primary jurisdiction of money-laundering concern.’”
Commenting on this DeBar said, “These people seem hell-bent on enabling - compelling, actually - the rise of an alternative global financial system, and it is interesting, to say the least, that this occurs at the same moment that one can actually be created.”
“Basically, the New York Times is negotiating with Trump over impeachment,” he stated.
When asked is the Times encouraging Trump to apply more pressure on Iran, the analyst said, “It's trying to compel him to do it. They believe they can paint Trump as being soft on Iran by laying this out if he refuses to do it.”
“The Times is one of the most Zionist rags on the planet,” he noted.
“But they like to portray themselves as liberal-minded, so the frozen conflict of the JCPOA was sufficient. However, they would like Trump to make war with Iran because they would like to make peace with Russia impossible,” he said.  “That's two birds with one stone.”
“And they try to show themselves as reasonable in the process, blaming the current set of bad choices on Trump's bad judgment,” he said.
“The actual target is Russia, Iran, China and any rising competitive structures,” he pointed out.