Countries in Contact with Taliban to Facilitate Afghan Peace: Abdullah

Chief Executive Abdullah Abdullah on Sunday said that some countries have maintained contacts with the Taliban to bring the militant group to negotiating table with the Afghan government. 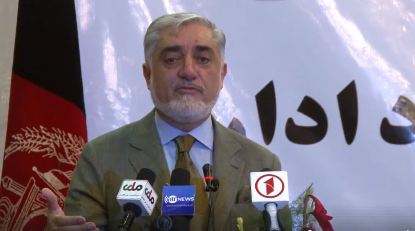 AVA- Speaking at a two-day meeting on corruption between the Ulema Council and the Attorney General in Kabul, Abdullah said that peace is the will of all Afghan citizens and that in recent days different countries have maintained contacts with the Taliban.
“Different countries are in contact with the Taliban and I consider these contacts helpful. It has been in the past and it will be in the future as well,” he said. “But it will be the Afghans who will make decisions on their own fate.”
The Chief Executive, meanwhile, stressed that the contracts of other nations with the Taliban were aimed at facilitating peace talks between the Taliban and the Afghan government.
This comes as in recent months several nations including the United States, Qatar, Saudi Arabia and the United Arab Emirates have stepped up efforts to make way for peace talks between the Taliban and the Afghan government.
Recently, an International Ulema Conference was held in Saudi Arabia which considered the ongoing war in Afghanistan as “illegitimate” and called for an end to violence in the strife-torn country.
However, some analysts believe the progress in this regard has always been blocked by the deep mistrust between the government and the Taliban, as well as uncertainty about the fate of these meetings.