Leader of the Islamic Revolution Imam Seyyed Ali Khamenei says closer relations and synergy among Muslim countries are the most important needs of the Muslim world. 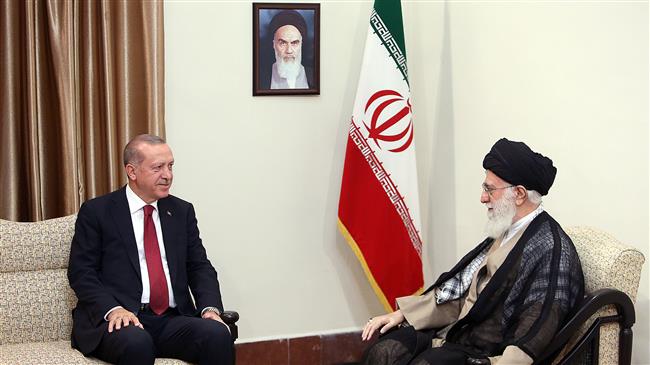 AVA- The Leader made the remarks in a Friday meeting with Turkish President Recep Tayyip Erdogan, who traveled to Tehran to take part in a key trilateral summit, hosted by Iranian President Hassan Rouhani and also attended by Russian leader Vladimir Putin, focusing on Syria.
"Unity and cooperation among Muslim countries will definitely prepare the ground for the settlement of regional countries and this is the reason that the Arrogance, led by the US, is concerned about cooperation and closeness among Muslim countries and the formation of an Islamic power," Imam Khamenei said.
The Leader added that this concern is the reason behind the US enmity and grudge against powerful Muslim countries.
"The Islamic Republic of Iran and Turkey are two dignified and powerful regional countries and have common interests in the Muslim world. So, the two countries' cooperation in political and economic fields must be further expanded," Imam Khamenei stated.
The Leader pointed to the positive cooperation between Tehran and Ankara and stressed the importance of strengthening common grounds between the two sides.
Imam Khamenei hailed Erdogan's stance on the issue of Rohingya Muslims in Myanmar and added that Palestine is always an "important" topic which should not be overlooked.
During the meeting, which was also attended by Iranian First Vice President Es'haq Jahangiri, the Turkish president said the Middle East is currently faced with a critical situation.
Erdogan said lack of coherence among Muslim countries is among the factors leading to the ongoing issues and expressed hope that regional woes would be solved through cooperation.
He added that the situation in the region has greater sensitivity due to the West's approach toward independent Muslim countries and called on Iran and Turkey to further develop cordial relations.