China vows to take 'countermeasures' over US tariffs on Chinese goods

China has vowed to take “necessary countermeasures" after US President Donald Trump escalated his trade war with Beijing; just hours after delegations from the two sides wrapped up a first day of trade negotiations in Washington. 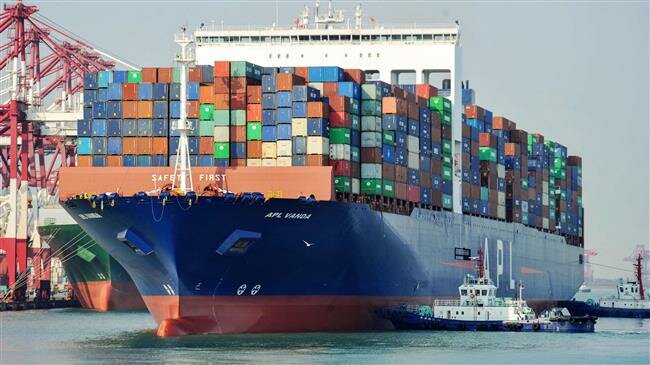 AVA- The Trump administrator raised tariffs on $200 billion of Chinese imports from 10 percent to 25 on Friday, as Beijing and Washington appeared to be close to ending months of trade dispute after returning to the negotiation table in Washington on Thursday.
Chinese commerce ministry on Friday lamented the move and reiterated Beijing’s pledge to take "necessary countermeasures.”
"China deeply regrets that it will have to take necessary countermeasures," the statement said, but did not specify what those countermeasures might be.
“It is hoped that the US and Chinese sides will meet each other halfway and work together” to resolve their dispute, it added.
China had earlier vowed to raise tariffs on $60 billion of US imports. It could also use other tactics to disrupt business for US firms in China.
Trump’s latest tariff hike took effect Friday, as a delegation of Chinese officials led by Vice Premier Liu He was to meet for a second day with US Trade Representative Robert Lighthizer and US Treasury Secretary Steven Mnuchin in Washington.
Trump initiated what is effectively a trade war with China last year, when he first imposed unusually heavy tariffs on imports from the country.
Since then, the two sides have exchanged tariffs on more than $360 billion in two-way trade.
Late Thursday night, Trump got a briefing from his trade negotiators, but made no move to hold off on the tariffs despite optimism from officials in recent weeks that the negotiations were moving towards an agreement in this round of talks.
Upon his arrival in Washington, the Chinese vice premier said that the prospects for the talks were "promising," but warned that raising tariffs would be "harmful to both sides.”
"Of course, China believes raising tariffs in the current situation is not a solution to the problem, but harmful to China, to the United States and to the whole world,” he added.
The International Monetary Fund also warned against the hike in tariffs, saying that the trade war was a "threat" to global growth.
Washington is pressing Beijing to reduce the trade imbalance between the two countries and implement structural changes in its practices concerning intellectual property and the transfer of US technology to Chinese firms.
China, however, says such reforms could only favor the US and lead to more protectionism in global trade.
While Trump describes the tariffs as punitive measures against China, many American complain of lost export markets, disrupted supply chains and higher costs.
Trade war great threat to world growth: France
French Finance Minister Bruno Le Maire on Friday warned against the escalation in the trade dispute, saying, “There is no greater threat to world growth… than a trade war between China and the United States.”
“Because it means that trade tariffs will go up, fewer goods will circulate around the world, we won't be able to circulate our own French goods as easily around the world, and jobs will be destroyed,” he added.
China slams ‘unreasonable suppression’ of Mobile
In a separate statement, Chinese Foreign Ministry denounced the US for the "unreasonable suppression" of the country’s telecom giant, Mobile.
"We urge the US to... stop the wrong practice of always using national security (as a pretext), and stop the unreasonable suppression of Chinese enterprises," said ministry spokesman Geng Shuang.
In a unanimous decision on Thursday, US Federal Communications Commission voted to bar the firm from selling phone service in the US, citing “grave risks to national security.”
The move blocks a years-long effort by China Mobile to gain access to US customers.
Washington has already launched an aggressive campaign against another Chinese telecommunication firm, Huawei, over accusations that the company was receiving funding from China’s National Security Commission.
Last year Trump signed a bill, which bans federal agencies and their contractors from purchasing Huawei’s equipment and services over the accusation that the Chinese government uses the company’s 5G (fifth generation) networks to spy on other countries.
China has constantly denied the allegations.