Syrian President Bashar al-Assad has stressed that nobody believes that Turkey will repatriate 3 million Syrian refugees to the northeast of the country and this is a deceptive humanitarian slogan raised by Turkish regime to create an ethnic conflict in this area and to bring the terrorists and their families into this region in order to create a new extremist community in line with the vision sought by President of the Turkish regime, Erdogan. 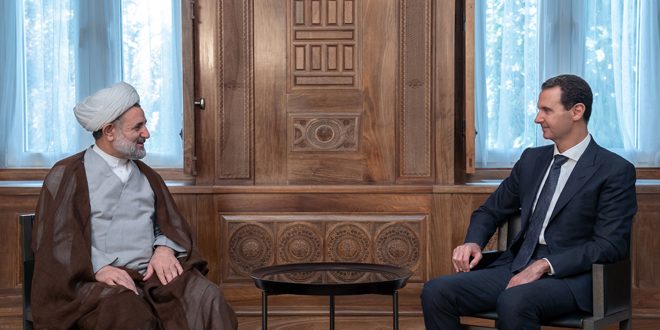 In an interview given to RUSSIA 24 and ROSSIYA SEVODNYA, President al-Assad clarified that most of the Kurds are patriots who support their state and the Syrian people, but there are groups, some of these groups are Kurds, some are Arabs, working under American command and there is currently a dialogue with them, since the return of the Syrian Army to north, to convince them that stability is achieved when all of us are committed to the Syrian constitution.
He said: “After nine years of war, I think that most people understand the importance of embracing the state regardless of political differences.”
President al-Assad emphasized that every war will result in a lot of changes in society but it doesn’t mean dividing the country, moving towards separation; throwing out the constitution or weakening the state, confirming that the war should be an experience from which we come out with a stronger, not weaker homeland.
He pointed out that the American presence in Syria will generate a military resistance which will exact losses among the Americans, and consequently force them to leave.  “However, America cannot believe that it will live comfortably in any area it occupies.  We remind them of Iraq and Afghanistan, and Syria will not be an exception.”
President al-Assad indicated that the immediate and most effective solution is to unite as Syrians and as patriots and this would cause the Americans to leave the Syrian territory.