Karzai, Abdullah have no plans for Afghanistan's future: Ghani 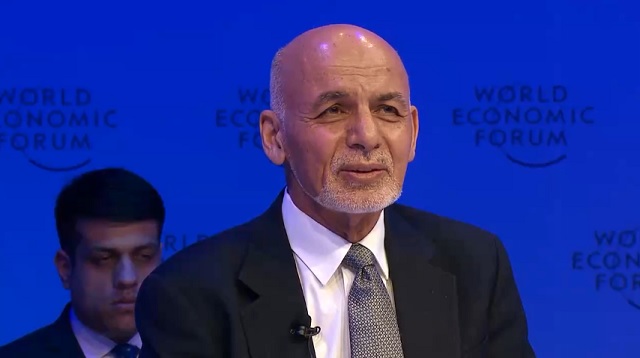 Ghani said this when asked for a response on criticism from Abdullah and Karzai over his insistence on a ceasefire before Taliban talks, during the World Economic Forum in Davos.
“Sour grapes. Did President Karzai achieve a ceasefire? I did. Did President Karzai offer an unconditional offer to the Taliban? I did. Who is approving in the public opinion polls that they would trust the peace process to? Me,” Ghani said.
“I am engaged with my people. I run on a platform and I have a program. What is the program of President Karzai and Dr. Abdullah. Please show me one piece of paper that either of the gentlemen have produced regarding the future of Afghanistan,” Ghani said.
“The Taliban went to their homes in 2001. For three years, there were security. What actions did the president take with his … and appointments to produce an insurgency? He has to answer the people of Afghanistan. I did not produce this war,” Ghani said.
During the interview, Ghani also said that the rank and file of the Taliban are sick and tired of fighting.
“The people who are sitting in Doha are getting their fourth or fifth wife and are enjoying themselves. The have become investors. The other is this is one of the largest drug running operations in the world – heroin and now amphetamine - so those parts need to be asked about the entire community. Will they be an asset or will they be a liability? It is an answer that we have to find together,” Ghani said.
Tags:
Karzai, Abdullah have no plans for Afghanistan's future: Ghani
Source : Afghan Voice Agency(AVA)
Thursday 23 January 2020 12:00
Story Code: 201607 Copy text available
Iran says Taliban must have role in Afghanistan's future, but not dominant one
Karzai says he strongly opposes the new strategy for Afghanistan
Karzai accuses US of aiding the ISIS militants in Afghanistan
Karzai Slams Govt, Threatens To Oust U.S From Afghanistan
Karzai Claims US Colluded With Daesh In Afghanistan
Featured news
Afghan forces convoy attacked in Kandahar
President Ghani Tasked Commission for Holding Inauguration ceremony
Afghan peace treaty signed in the presence of Pakistan: Shah Mehmood
Memorial monument for media martyrs in less than a month: Sharq
First-ever Afghan Freight Train Leaves Karachi for Kandahar
China Has Done Tremendous Job in Containing the Virus: Afghan Amb.
1
Prominent Taliban leader killed in Afghan forces operation in Badakhshan province
2
Air raids kill 4 IS militants in eastern Afghanistan
3
Afghans anxious as election results are disputed after US-Taliban deal
4
Afghan- Americans joint work on violence reduction
5
Afghan election results fuel tensions in the country
6
Zalmay Khalilzad, Josep Borrell discuss taliban deal with Ashraf Ghani
7
Afghan Government to form inclusive negotiating team for peace talks, Arg
8
Airstrikes, Special Forces raid kill 6 IS-K terrorists in Kunar: MoD
9
India Congratulates President Dr. Ashraf Ghani on his re-election as President of Afghanistan
10
Taliban declared the Afghan election results illegal in a statement