China on Sunday expanded drastic travel restrictions to contain a viral contagion that has killed 56 people and infected nearly 2,000, as the United States and France prepared to evacuate their citizens from a quarantined city at the outbreak’s epicenter. 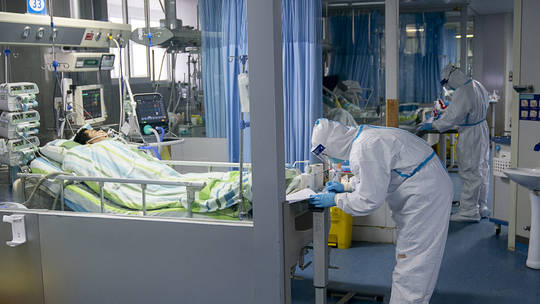 The first death was reported in Shanghai, and another one in Henan Province, while 13 more people died in Hubei Province – the epicenter of the outbreak – where nearly 130 people were reportedly in serious or critical condition as of Sunday morning. In addition to hundreds of known and confirmed cases, some 7,000 people there remain under increased medical supervision due to their potentially dangerous “close contacts.”
Meanwhile, the number of those who have beaten the virus and were discharged from hospitals has increased to at least 85, according to authorities.
China is facing a “grave situation” as the new coronavirus is “accelerating its spread,” President Xi Jinping warned earlier. He added, however, that given the immense efforts to contain the outbreak, China “will definitely be able to win the battle.”
Around 450 Chinese military medics, many with experience in combating SARS or Ebola, were deployed in the region to help the overworked and exhausted hospital staff, who had been on around-the-clock shifts in recent weeks. Meanwhile, local authorities are rushing to construct a new 1,000-bed facility specifically to treat victims of the deadly virus.
China has locked down the hard-hit province of Hubei in the country’s center in an unprecedented operation affecting tens of millions of people to slow the spread of a respiratory illness.
Outside the epicenter, three cities, including Beijing, and an eastern province announced bans on long-distance buses from entering or leaving their borders.
Originating in Hubei’s capital of Wuhan, the virus has spread throughout China and around the world, with cases confirmed in around a dozen countries as distant as France, Australia and the United States.
China would normally be celebrating the Lunar New Year holiday this week, but Wuhan’s eery quarantine calm deepened on Sunday as new restrictions banned most road traffic in the metropolis of 11 million.
Loudspeakers offered tips slathered with bravado.
“Do not believe in rumors. Do not spread rumors. If you feel unwell, go to the hospital in time,” the message said.
“Wuhan is a city that dares to face difficulties and keeps overcoming them,” the female voice added, mentioning the deadly 2002-03 SARS epidemic and 1998 Yangtze River flooding.