An official at the Herat customs office said revenues are lost because of "tax evasion, corruption and the influence of strongmen." 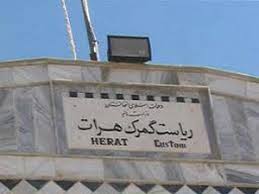 A senior official in the customs office in the western province of Herat claimed that almost 30% of customs revenue for imported goods is being lost due to “embezzlement” by "strongmen," among whom are "high-ranking government officials."
The revenue of the Herat customs office, which operates under the Ministry of Finance, collected Afs18 billion (over $234 million) in the 1398 solar year – March 2019 to March 2020 – but its target was Afs32 billion (over $416 million), the deputy head of the customs office of Herat, Jawed Samim, said.
The customs revenue is marred by tax evasion, corruption and strongmen’s influence, he said, adding that an estimated six billion Afghanis (about $78 million) has gone into the pockets of strongmen over the last year.
He said that the “strongmen,” among whom are government officials, are taking imported goods through the customs office without paying taxes, using their influence.
This issue has pushed the officials to reduce their target for the next fiscal year to Afs21 billion – about $273 million.
The deputy head of the customs office, however, refrained to name any specific individual or official allegedly involved in “widespread” corruption in the office.
Herat, which shares a border with Iran, is a primary port city in the west of Afghanistan through which large quantities of foreign goods are imported on a daily basis – including vehicles, fuel, and other commodities.
“For sure, strongmen are involved in reducing Herat customs revenue,” Mr. Samim said. “These strongmen can be at any level… We regretfully lose 20 to 30 percent of our revenue in Islam Qala Customs Office.”
Two legislators from Herat, meanwhile, pointed at government officials, both local and in Kabul:
“Senior officials in the Ministry of Finance and in Kabul, and a number of provincial officials in Herat, are involved in embezzlement in Herat customs,” said Habib-Ur-Rahman, an MP from Herat.
“The budget estimated for the next year is Afs16 billion (about $5.4 billion), drawing from the national revenues and the international community’s contribution. Almost Afs208 billion ($2.7 billion) is from the national revenues and it is a big amount,” said Sayed Azim Kebarzani, an MP from Herat and member of the budget and finance committee of the Wolesi Jirga, the lower house of the parliament.
“It will have a bad impact on our revenues if we cannot meet the demand for the national budget,” he added.
Herat governor Abdul Qayum Rahimi did not reject the possibility of corruption in the customs office of the province.
“We have many big problems in Herat, one of them is the customs issue,” the governor said, adding that the "whole capacity" of customs income is not used properly.