Dozens of Balkh residents on Tuesday staged a protest in front of the provincial office of the country’s power distributor Da Afghanistan Breshna Sherkat (DABS) against high electricity bills for consumers, saying they cannot afford the expenses of electricity and that the prices should reduce.=
The residents of Mazar-e-Sharif city, the center of Balkh, pay Afs6.25 for one kilowatt of power. The price is Afs2.5 in Kabul. The protestors warned to close DABS office in Balkh if their demands are not met.
“I have Afs7,000 ($90) monthly income, but we receive electricity bills of Afs3,000 ($39) to Afs4,000 ($52) every two months. How can I the expenses of my family with the remaining amount? This is an oppression,” said one protestor Mirwais.
“There are many people in our vicinity who have less than Afs250 ($3) daily income, but their electricity bills are between Afs3,000 ($39) to Afs4,000 ($52),” said Zalmay, a Balkh resident.
The protestors said they shared their complaint with relevant departments several times but their voice “was not heard.”
“We will establish a sit in camp here (in front of the DABS office in Mazar-e-Sharif),” said Bawar Bamik, a protestor. “We will close DABS office in Balkh. Another option is to boycott payment of the bills.”
Echoing the remarks by other protestors, Shazia Haqjo, a Balkh resident, said there are some people whose interests are at danger; therefore, they do not support any plan to reduce electricity prices in the northern province.
DABS officials in Balkh vowed to overcome the issue by implementing a new plan.
“Regarding this issue, DABS decided to adopt an equal tariff standardization of imported electricity throughout Afghanistan,” said Hamidullah Hamidi, head of DABS in Balkh. “The Presidential Palace has also issued a directive regarding this issue.”
Hamidi added that based on a new plan, monthly electricity bills will be distributed to consumers in Balkh.
Statistics by DABS show that Afghanistan pays over $280 million annually to import 670 megawatts of power from Uzbekistan, Tajikistan, Turkmenistan and Iran. Despite the huge expense of imported power, only 35 percent of Afghans have access to electricity, government figures show. 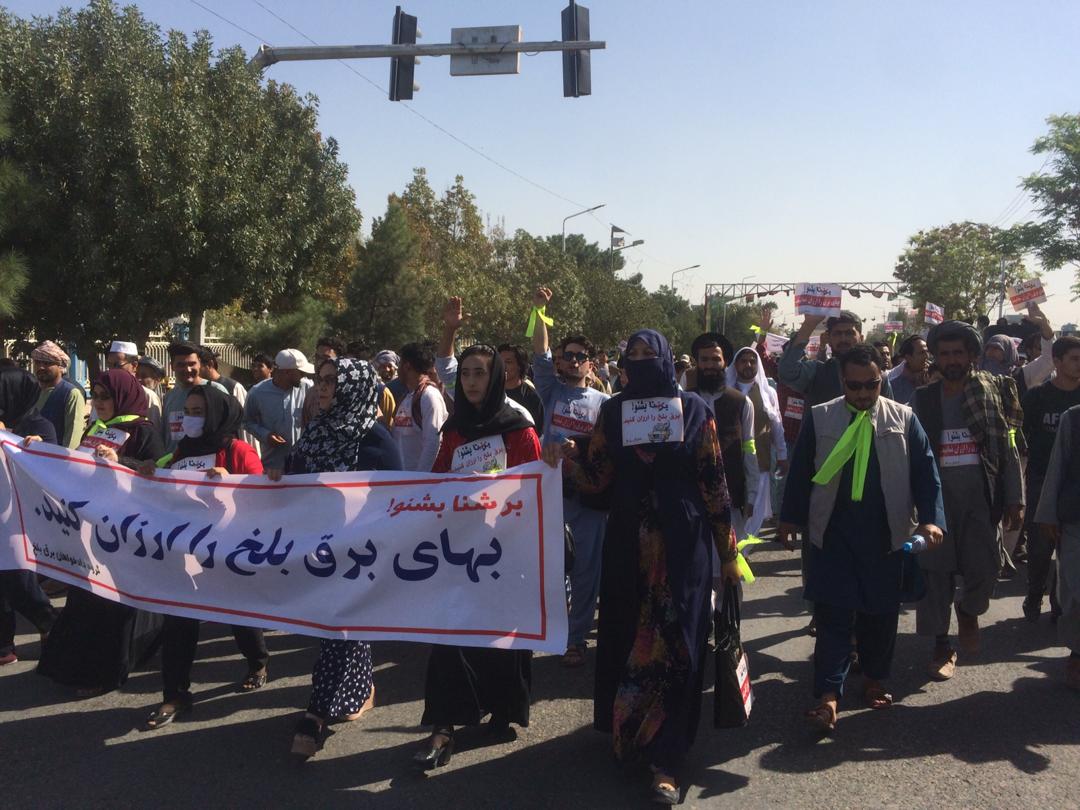 Source : Afghan Voice Agency(AVA)
https://avapress.com/vdceev8wzjh8zoi.1kbj.html
Share It :
avapress.com/vdceev8wzjh8zoi.1kbj.html
Tags
Balkh Residents Protest over High Electricity Bills
Post a comment
Latest News
Humanitarian assistance should not be politicized
Nooruddin Azizi meets with EU envoy
CT Scan Capability in Herat's Regional Hospital
UK Teachers and Civil Servants Join Biggest Strikes
Kremlin called the sending of Western tanks to Ukraine a source of tension
Iran hoping to establish trade hub in Afghanistan
A heavy rocket attack on the Turkish military base in northern Iraq
Pakistan frees 120 Afghan refugees
Envoys West, Sadiq Meet on Afghanistan in Islamabad
The ten days of Fajr Occasion; The resurgence of Islam
The implementation of anti-terrorist operations was placed on the agenda of the Pakistan Army
The visit of foreign and domestic tourists to Ghazni has increased
Booksellers expressed their concern about the decrease in sales and the increase in book taxes in Herat
A guard is appointed to protect the ancient monuments of Herat
Supporting domestic businessmen encourages foreign investors
Top hits
1
The UN emphasizes the importance of humanitarian aid in Afghanistan
2
Afghanistan's exports will reach 2 billion dollars by the end of the year
3
"Mike Pompeo's Diary" is a bare document of the dirty nature of the Yankees
4
Important nests of ISIS in different cities of Afghanistan have been destroyed
5
Ukraine's unwillingness to negotiate with Russia
Note

The ten days of Fajr Occasion; The resurgence of Islam

British human rights and the story of missing children
Interview

Governor of Bamyan: People feel calm under the shadow of the current system

US ‘cannot win war’ in Afghanistan, is looking for a way out: Expert
Special Report