The Donald Trump administration has notified Congress that Iran has been compliant with its commitments under the 2015 nuclear agreement, and that the administration is reviewing whether a continued suspension of the sanctions serves the national interests of the United States. 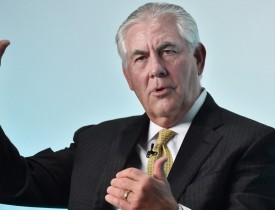 Afghan Voice Agency(AVA),In a letter to Rep. Paul Ryan, speaker of the House of Representatives, Secretary of State Rex Tillerson said the administration has undertaken a full review of the nuclear accord known as the Joint Comprehensive Plan of Action (JCPOA).

"President Donald J. Trump has directed a National Security Council-led inter-agency review of the Joint Comprehensive Plan of Action that will evaluate whether suspension of sanctions related to Iran pursuant to the JCPOA is vital to the national security interests of the United States," Tillerson said in a statement Tuesday.

The White House must send certification of Iran’s compliance with the JCPOA to Congress every 90 days, and it was the first issued by the Trump administration.

Tillerson, however, accused Iran of being “a leading state sponsor of terror, through many platforms and methods," and noted the administration would review the nuclear deal with that in mind.

Similar accusations leveled by US officials have in the past drawn strong reactions from Iranian authorities. Early this month, Iranian Foreign Ministry Spokesman Bahram Qassemi advised US Defense Secretary James Mattis against making such "unwarranted and malicious accusations against Iran."

He said Washington should instead oblige its regional allies to halt their widespread financial, ideological, and military support for the terrorist outfits that have been plaguing several countries.

As a candidate in the 2016 presidential election, Trump frequently criticized the JCPOA as “the worst deal ever negotiated,” but offered conflicting opinions on whether he would try to scrap it, renegotiate its terms or keep it in place.

Iran and the five permanent members of the United Nations Security Council - the US, France, Britain, Russia and China plus Germany – sealed the JCPOA in July 2015 following 18 months of intense negotiations.