The Taliban insurgents have executed two important leaders of the Islamic State of Iraq and Syria Khorasan in Nangarhar province. 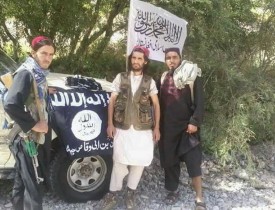 AVA- According to reports, the two local ISIS leaders were initially arrested by the Taliban insurgents and were executed on charges of killing civilians and Taliban fighters.

The provincial government in Nangarhar also confirmed the execution of the two ISIS leaders.

A statement by the media department of Nangarhar government said the two ISIS leaders were executed in the restive Bati Kot district.

The statement further added one of the slain ISIS leaders was identified as Qadir who was in charge of a group of fifty fighters and was arrested from Bati Kot district where he was executed shortly after his apprehension.

The other ISIS leader detained and executed by the Taliban insurgents has been identified as commander Nasir who was arrested from Momand Dara area.

According to Nangarhar government, the two ISIS leaders were involved in the killing of dozens of the local residents and Taliban insurgents.

The anti-government armed militant groups including the Taliban and ISIS group have not commented regarding the report so far.