A number of political figures and civil society activists have urged mobilization of people against the actions of the terror groups in the country. 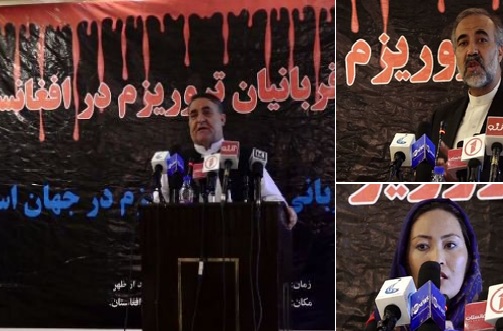 Criticizing the United Nations’ action regarding the recent insurgent attacks in the country, the politicians and civil society activists urged the government to avoid supplicated actions against the armed groups.
Addressing a commemoration ceremony held for the victims of terrorism in the country, Ahmad Sayed, a politician and commentator said that all the international entities in Afghanistan including UN only condemning the militant attacks in Afghanistan, instead of having actions to prevent such incidents.
“Wasn’t it your decision to work with us? Wasn’t it our decision to bring peace and stability? They [the government] should give response,” said Sayed Ali Kazemi, a member of the parliament.
Some participants including relatives of the victims of the recent attacks, meanwhile, reasoned the government’s war and peace policy behind the rise in casualties to civilians and military forces; referring to the government’s three months conditional ceasefire with the Taliban as an example in this regard.
“When I voted, expected to ensure my security; not be a witness of transferring our relatives’ dead bodies to home,” said a civil society activist Roshan Ghaznawi.
“The government at least address the demands of the people including maintaining their security,” said Mohammad Ali, a relative of the victims of the recent bombing at an educational center in Kabul’s Dasht-e-Barchi area which left dozens of people killed and wounded.
Tags:
Politicians, Civil Society Activists Urge People’s Mobilization against Terror Groups
Monday 20 August 2018 19:21
Story Code: 169214 Copy text available
Politicians Warn Gov’t Over Delay in Election
US Politicians Challenge Donald Trump's Multi-Billion Dollar Saudi Arabian Arms Deal
Featured news
MoPH Says COVID-19 Cases Decreased By 40% As Tally Reaches 33,908
Reporters Without Borders Condemns Arrests, Harassment Of Journalists
Oil prices down with surprise rise in US crude stocks
Taliban: ‘Anti-Peace’ Circles Drawing Links To Uzbek Jihadist Group
12 Taliban insurgents killed in Paktia clashes
Dispute Over 592 Taliban Prisoners Solved: Source
1
‘Russian bounties’: payback or White House incompetence?
2
Taliban needs to end violence to help kick start intra-Afghan talks: NATO envoy
3
Russian diplomat says some members of US intelligence involved in Afghan drug trafficking
4
Each Afghan province will have a female deputy governor
5
Pakistan invites chief Afghan peace negotiator Abdullah
6
Iraqis rally to decry Saudi paper’s offensive cartoon of Ayatollah Sistani
7
Pak FM talks to Chinese Counterpart; Discusses Afghan Issues
8
Ghani appoints new governors for five provinces of Afghanistan
9
Telephone Conversation between the Acting Foreign Minister and the British Ambassador to Afghanistan
10
The Haqqani Network and the failing US-Taliban deal