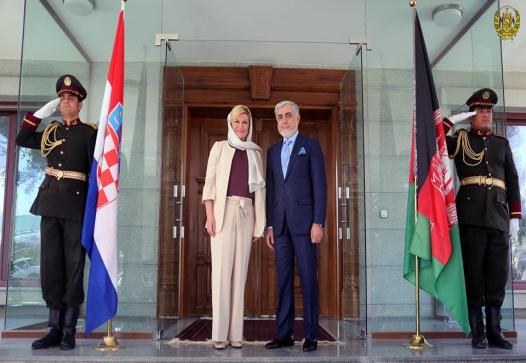 Abdullah met with visiting Croatian President Kolinda Grabar-Kitarović in Kabul and thanked troops from his country for assisting the Afghan forces as part of NATO’s Resolute Support Mission.
The Croatian troops are based in Mazar-i-Sharif, the capital of northern Balkh province.
A statement from the CEO office quoted Abdullah as insisting that supporting the Afghan forces in their fight against terrorism and ensuring security for the upcoming elections and peace was important.
About security and political situation of Afghanistan, Abdullah said: “Political stability and good governance are important for eliminating terrorism and improving the general situation.”
He sought regional and international support in fighting terrorism which he called ‘a common global threat.’
The Croatian President, Kolinda Grabar-Kitarović, reaffirmed her country’s cooperation with Afghan security forces in fighting terrorism.
She said she met with Croatian forces in Mazar-i-Sharif and stressed on the importance of peace and stability for the entire world. She said their forces would not hesitate from assisting the Afghan forces.
Grabar-Kitarović also called for strengthening diplomatic and economic relations between the two countries and said Afghanistan and Croatia had a long history of relations.
The two sides also discussed peace talks, upcoming parliamentary and presidential elections, regional cooperation for fighting terrorism and ensuring peace in Afghanistan.
They also conferred on the US strategy for Afghanistan and South Asia, the role of Croatian troops in assisting Afghan forces and political and security situation of Afghanistan during the meeting.