Fifteen people were killed and 25 others wounded in a traffic accident in the Zhari district of southern Kandahar province on Saturday, officials said. 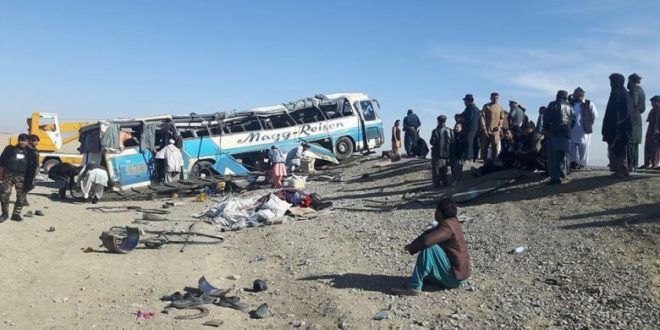 AVA- Aziz Ahmad Azizi, the governor’s spokesman, told media the accident took place on Kabul-Kandahar highway in Hauz-i-Mumad area of the district at around 6am.
He said the accident occurred when a 404 model bus collided head-on with a Mazda type vehicle. At least 15 people, including six women, four children were killed and 25 others wounded, he added.
Abdul Bashir Khaksar, deputy police spokesman, confirmed the accident and said the injured had been evacuated to Civil Hospital by police.
He said the injured were in stable condition and the bus belonging to Ahmad Shah Abdali Transport Company. Investigation underway on the accident, he concluded.