Sayyed Nasrallah Welcomes Idlib Accord: Hezbollah to Remain in Syria

The secretary general of Lebanon’s Hezbollah resistance movement has accused the US of prolonging the life of Daesh terrorists in Syria in order to beef up US military presence in the Middle East. 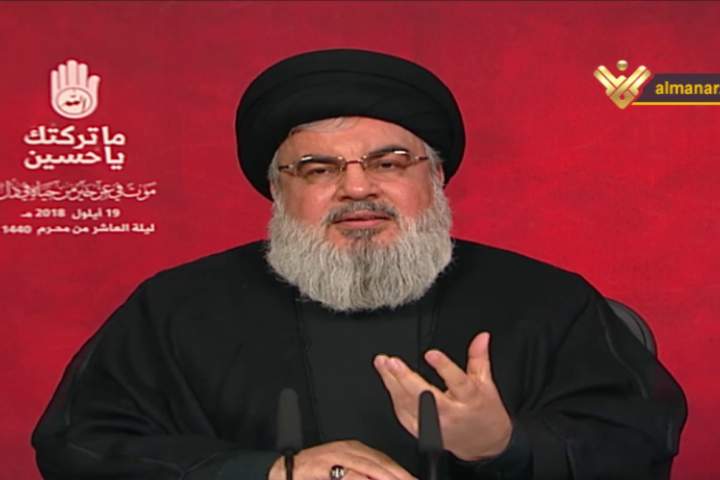 AVA- In a televised speech on Wednesday night, Sayyed Hassan Nasrallah stressed that the US has created the Takfiri terrorist group and provided it with every support it needs.
“The US support has prolonged Daesh’s presence in some areas in northeastern Syria,” the Hezbollah leader stated.
He also censured Washington for interfering in the internal affairs of other countries.
Hezbollah to stay in Syria ‘until further notice’
Elsewhere in his remarks, Nasrallah said the Lebanese resistance movement will stay in Syria for the fight against terrorism as long as Damascus needs it.
"No one can force us out of Syria... We will stay until further notice," he stressed, adding, "Our presence there is tied to necessity and to the consent of the Syrian leadership."
"We will remain there even after the Idlib accord," Nasrallah added, referring to a Russia-Turkey deal to create a buffer zone in Syria’s Idlib province, the last major terrorist bastion in the Arab country.
On Monday, Russian President Vladimir Putin and his Turkish counterpart Recep Tayyib Erdogan announced after their talks in the Black Sea resort of Sochi that they had agreed to create a demilitarized zone of a depth of 15-20 kilometers in Idlib along the contact line between the armed opposition and government troops by October 15.
"Naturally, the calm of the front lines and the decline in threats will have an impact on the numbers present," he said.
"With the Idlib accord, if everything is done correctly, we can suppose that Syria will head towards a great calm, and in concrete terms there will no longer be front lines," said Nasrallah.
He also commended the outcome of a summit on Idlib hosted by Iranian President Hassan Rouhani and attended by his Turkish and Russian counterparts earlier this month in Tehran.
Iran, along with Russia and Hezbollah, has been effectively helping the Syrian government in its fight against terrorists.