The Afghanistan Federation of Journalists (AFJ) on Sunday voiced concern over not discussing the freedom of speech, the most important achievement of the country, in the peace talks 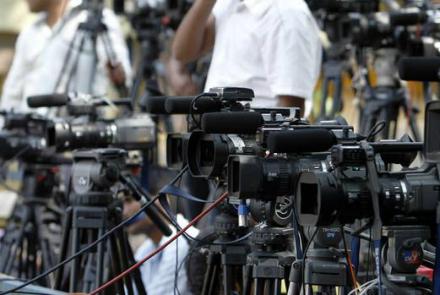 AVA- Officials of the journalist body told a press conference in Kabul that the freedom of expression was one of the biggest achievements of the past 18 years, but it was never discussed during peace talks, something they were worried about.
An AFJ statement was also read out at the press conference, in which all foreign countries and international organizations involved in the peace process, the Taliban and especially the Afghan government to regard the freedom of speech, access to information and independent functioning of media outlets as a fundamental principle in the peace dialogue.
The statement further added that the outcome of the ongoing peace efforts ‘must not fly in the face’ of the freedoms awarded to media outlets and reporters in the Constitution, the Mass Media Law, the Law on Access to Information and other legislative documents.
Media outlets and the AFJ supported the peace talks but they were not ready to sacrifice the hard-won values and achievements of the past 18 years.
The AFJ also urged all sides of the peace discussions, especially the Taliban, to guarantee the safety and security of journalists and media outlets in the peace process.
The journalist body’s statement also asked parties to the conflict to pave the ground for journalists’ access and collection of information in their respective territories and requested them not to be a threat and barrier to journalists’ free movement across the country.
Meanwhile, Sardar Mohammad Dindarkhil, a member of AFJ, slammed the approach to freedom of speech as neglectful and said the media achievements had never been brought up for a discussion during peace talks so far. “This inattention means sacrificing these values for peace.”
Dindarkhil said the AFJ was not against peace talks but it wanted the government to pay heed to these achievements during peace negotiations.
He proposed the presence of a representative on behalf of AFJ and media outlets in the peace process to safeguard and protect the rights of media.
Fahim Dashti, deputy head of the Joint Committee of Media and Government, said: “We are not only requesting the government and the Taliban, but all countries and international organizations partaking in the Afghan peace process that we don’t want achievements of media to be sacrificed that way.”