The pound fell Friday after Britain's parliament again rejected a proposed deal to withdraw from the European Union. 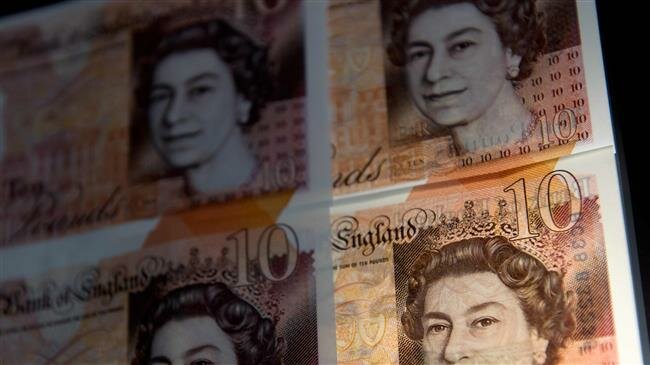 AVA- Sterling had been mostly stronger against both the dollar and the euro in the runup to the vote, but then fell to its lowest point against the greenback in more than two weeks within moments of the count.
It then went on to recoup some of the losses towards the late afternoon, proving right analysts like ThinkMarkets' Naeem Aslam who had predicted "crazy moves" in sterling before voting began.
"Sterling's midday bounce felt a long way away on Friday afternoon, as MPs inflicted another embarrassment on a Theresa May premiership defined by them," said Spreadex analyst Connor Campbell.
Lawmakers in parliament's lower House of Commons defied May's plea to end a political deadlock over Brexit, defeating her withdrawal agreement by 344 votes to 286.
"We thought it was going to be a lot closer," Joshua Mahony told AFP on the IG trading floor in London. "Everyone is now starting to wonder exactly what happens next."
'Sleep-walking'
"No-one really wants to say it but we are in danger of sleepwalking into an unintended no-deal scenario here, an outcome that looked highly unlikely just a couple of weeks back, and this poses a major risk for the pound," said XTB analyst David Cheetham.
The EU Commission seemed to agree, saying after the vote that a no-deal Brexit was now a "likely scenario".
A scenario that, IG's Mahony said, was on investors' minds as they sold off sterling.
"Whenever you've tracked the pound it has always been reflecting the market sentiment surrounding the possibility of a no-deal Brexit -- and I think today's move really does reflect that," he said.
The pivotal vote came on the day Britain was supposed to leave the European Union until May asked the bloc's leaders last week for a little more time.
Stock markets, including London, meanwhile rallied, with investors looking past a downgrade of US growth to focus on the next round of top-level China-US trade talks.
Stocks doing ok
Although equities have been dogged by fears over the outlook for the economy, markets have enjoyed a stellar first-quarter overall, mostly on hopes of a US-China tariffs deal and the prospect of lower borrowing costs.
European stocks were solidly higher by the close, while Wall Street was also firmly in the black in the early New York afternoon.
In commodities, oil prices were headed for a strong finish to the week, having enjoyed their best quarter in 14 years, with Brent crude jumping 26 percent and WTI by 29 percent since the start of the year on tighter supplies.
US President Donald Trump on Thursday called on OPEC to boost oil output following the price rises since the beginning of 2019.
The Organization of Petroleum Exporting Countries in December reached a deal with Russia and some other non-cartel producers to limit output to shore up prices.
"While OPEC, and above all (kingpin member) Saudi Arabia, appeared in November to be obeying US President Trump's repeated demands to increase oil production, his tweets now are more likely to fall on deaf ears," analysts at Commerzbank said Friday.
Oil futures have won support also from unrest in OPEC-member Venezuela.
"US sanctions, power outages and mismanagement are having a massive effect on Venezuela's oil production and oil exports at present," they added in a research note.
Key figures around 1645 GMT
Pound/dollar: DOWN at $1.3024 from $1.3054 at 2100 GMT
Euro/pound: UP at 86.19 pence from 86.03 pence
Euro/dollar: DOWN at $1.1223 from $1.1226
Dollar/yen: UP at 110.81 yen from 110.62 yen
London - FTSE 100: UP 0.6 percent at 7,279.19 (close)
Frankfurt - DAX 30: UP 0.9 percent at 11,526.04 (close)
Paris - CAC 40: UP 1.0 percent at 5,350.53 (close)
EURO STOXX 50: UP 1.0 percent at 3,351.71
New York - Dow: UP 0.6 percent at 25,860.68
Tokyo - Nikkei 225: UP 0.8 percent at 21,205.81 (close)
Hong Kong - Hang Seng: UP 1.0 percent at 29,051.36 (close)
Shanghai - Composite: UP 3.2 percent at 3,090.76 (close)
Oil - Brent Crude: UP 34 cents at $67.44 per barrel
Oil - West Texas Intermediate: UP 64 cents at $59.94 per barrel