US Iran sanctions amount to aggression against entire world: Nasrallah

The secretary general of the Lebanese Hezbollah resistance movement has denounced US economic sanctions against Iran, describing the punitive measures as “an act of aggression” against all world nations. 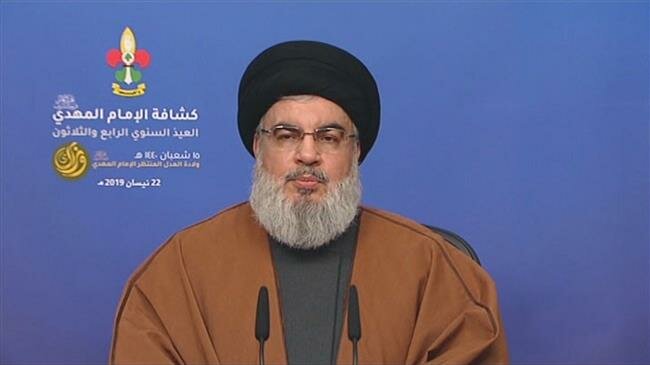 AVA- “US efforts to increase economic pressure on Iran, especially its pledge to drive the country’s oil exports to zero, will have negative repercussions and will affect the entire world, including the US itself,” Sayyed Hassan Nasrallah said as he addressed his supporters via a televised speech broadcast live from the Lebanese capital Beirut on Monday evening.
He then called on world nations to stand up against “US arrogance,” pointing out, "The tyrannical US government has no respect whatsoever for international law and regulations.”
Nasrallah also lashed out at Saudi Arabia and the United Arab Emirates for following in US footsteps and joining Washington’s economic pressure campaign against Iran.
Elsewhere in his remarks, the Hezbollah chief roundly rejected media allegations that the Israeli regime is planning to launch a surprise war against Lebanon this summer.
“There is very little likelihood that Israel would launch another war on Lebanon. The Israeli army is not prepared for any aggression against the country. I personally don’t think such a thing would happen,” Nasrallah highlighted.
The Hezbollah chief also dismissed claims of infighting between Russian and Iranian forces in Syria’s eastern province of Dayr al-Zawr as well as the northern province of Aleppo, stating that Saudi-owned al-Arabia television news network has “disseminated such lies.”
“Saudi-backed media outlets are spreading lies and fallacies about Hezbollah, Iran and the region to a large extent,” Nasrallah said.
The Hezbollah secretary general then slammed Saudi Arabia and the UAE for spreading terrorism and chaos in countries like Yemen, Sudan and Libya.
Nasrallah also blamed Wahhabism for the emergence of regional terrorism and Takfiri terrorist groups like al-Qaeda and Daesh.
Wahhabism is the radical ideology dominating Saudi Arabia, freely preached by government-backed clerics there, and inspiring terrorists worldwide. Daesh and other Takfiri terror groups use the ideology to declare people of other faiths as “infidels” and then kill them.
“There are many agents in the Middle East, who are pushing for sectarian strife to serve the interest of the Zionist regime (of Israel). All those seeking to colonize the region will only raise public awareness,” the Hezbollah chief said.
Elsewhere in his remarks, Nasrallah touched upon the economic crisis in Lebanon, demanding greater cooperation and unity among Lebanese political factions.
“All Lebanese parties agree that Lebanon is suffering from serious financial woes. They are all involved in coping with the economic crisis. Resolving Lebanon’s problems requires patience and efforts by all political parties. Ministers affiliated to Hezbollah, lawmakers as well as specialists have already prepared a number of draft solutions for Lebanon’s economic crisis,” Nasrallah underlined.