Having lost each of their five completed games so far, Afghanistan face an uphill challenge as they take on India in their sixth match of the ICC Men’s Cricket World Cup 2019 Saturday. 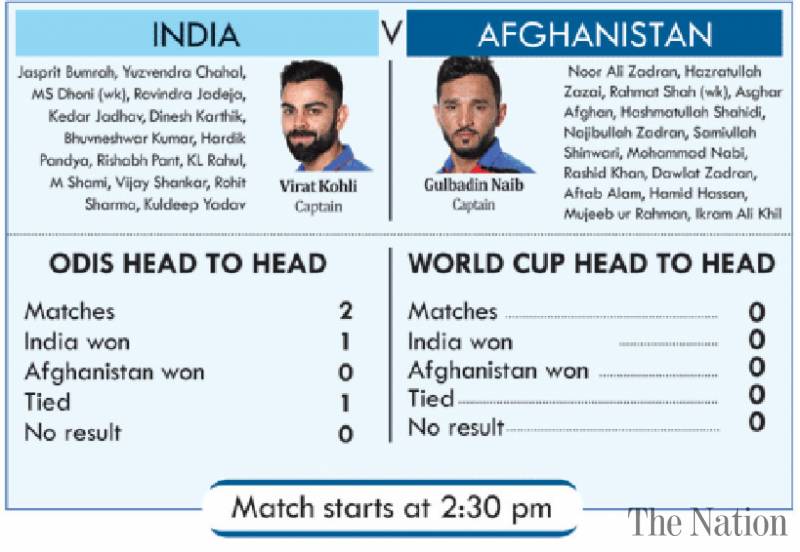 AVA- India’s progress at the ICC Men’s Cricket World Cup 2019 has been an ascending march so far. They have put on complete performances in each of their three completed games. While the top-order has consistently given good starts, the bowlers, aided by some good fielding, have backed it up with disciplined performance. The team management, however, will be worried over their key players getting injured.
Mohammed Shami is likely to replace Bhuvneshwar Kumar in the playing XI against Afghanistan as the latter has been ruled out due to hamstring injury. There is some doubt over Vijay Shankar’s inclusion too, who was in pain after being hit on his toes by a Jasprit Bumrah yorker, during India’s training session on Wednesday.
Afghanistan have been unable to recreate the magic they did in the ICC Men’s World Cup Qualifiers and Asia Cup last year, having faced five defeats in as many completed games so far. Inconsistent bowling and dropped chances in the field cost them dearly against England, as they were set a daunting target of 398 by the hosts. The batsmen, having batted for the full 50-overs at Old Trafford, will have to do so again, in order to pose any challenge to a strong Indian side.
KL Rahul was promoted to open in absence of Shikhar Dhawan in the previous game, and gave good account for himself with a gritty 57 against Pakistan at Old Trafford. The 27-year old, who scored a century on his ODI debut three years ago, will fancy his chances for an elusive second one against Afghanistan.
Hashmatullah Shahidi, the left-handed batsman, played a defiant innings against New Zealand and England, only to watch wickets falling from the other end.
Hashmatullah, who completed 1,000 ODI runs during his 100-ball 76 against England, will again look to make a mark on Saturday.
It is likely to remain dry tomorrow with almost no chances of rain. There will be sunny spells for most part of the day with partial build up of cloud. Teams batting second have won both the completed games at the Hampshire Bowl so far.