Nabil Invites Govt Leaders For Debate As He Begins Campaign 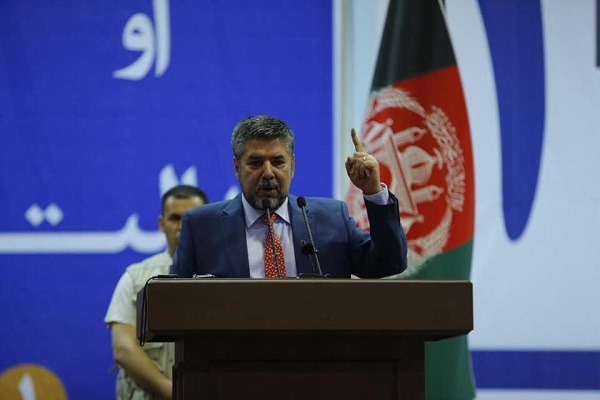 Nabil said the government leaders have failed to serve the people and practice good governance over the past five years.
Nabil, who represents the Security and Justice Election Campaign Team, invited Abdullah and Ghani for an election debate.
“Has the leading [election] team succeeded in bridging the gaps in social differences and preventing disunity among people? No,” he said.
Nabil said the high rates of poverty and unemployment are because of demagogy and violation of law by government leaders.
“We [Afghans] sacrifice our lives but I don’t know why discussions are underway on my country abroad and we are not included,” Mr. Nabil said, referring to the start of a new round of talks between the US and the Taliban in Qatar.
Mr. Nabil mentioned that he will not oppose the amendment of the Constitution based on people’s will.
Nabil, who has served as the head of National Directorate of Security during former president Hamid Karzai’s government, said Afghanistan’s leaders who have committed mistakes in the past four decades should apologize to the people and should leave the political arena.
“A president can be elected by two million votes while we have three to four million [drug] addicts. An addict would have been elected as president if he wanted to run [for president],” he said.
Mr. Nabil’s running mates Gen. Murad Ali Murad and Massouda Jalal meanwhile stressed the need for a transparent and fair election on September 28.
“Elections are the only legitimate way for peaceful power transition,” Gen. Murad said.
Tags:
Nabil Invites Govt Leaders For Debate As He Begins Campaign
Source : Afghan Voice Agency(AVA)
Saturday 3 August 2019 18:01
Story Code: 189449 Copy text available
Featured news
Khalilzad lauds formation of inclusive negotiating team for the talks with Taliban
Seven members of Taliban 'Red Unit' killed in Jowzjan
15 new cases of coronavirus emerge in Afghanistan
More new details emerge regarding the Indian man who attacked the Afghan Sikhs in Kabul
Afghan spymaster to lead peace talks with Taliban
US special envoy congratulates Afghan leaders on team for Taliban talks
1
PM Modi-Afghan PM Ghani discuss COVID-19 situation
2
Developing: Attack on Dharamshala Ends After Six Hours of Clash
3
ISIS claims attack on Sikh worshippers in Kabul Gurdwara, death toll rises to 25
4
COVID-19: Afghanistan lockdowns frontline provinces
5
NATO Chief Hails Qatari Amir on Afghan Peace Deal
6
India strongly condemns suicide attack on Sikh shrine in Kabul
7
Prisoner exchange between Kabul and Taliban will begin on March 31
8
Abdullah says Ghani's response to US aid cut 'irresponsible'
9
Iran Condemns Deadly Attack on Sikh Temple in Afghanistan
10
Afghan Gov’t to Give Martyrs’ Compensation to Health Workers Die of Coronavirus