The process of transporting sensitive election materials from provincial capitals to districts will end tomorrow, officials said on Sunday. 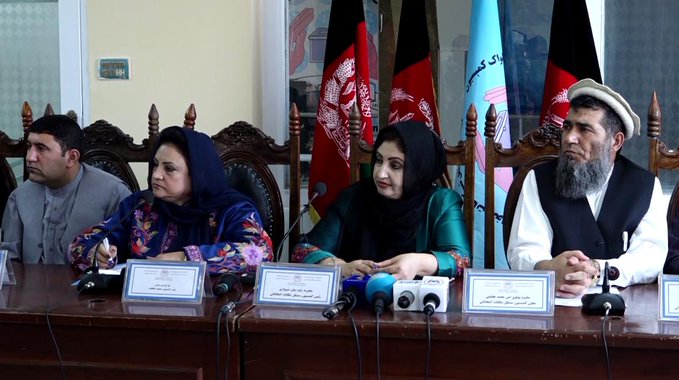 Addressing reporters in Kabul, election officials said that all preparations were taken for the presidential election which is due to be held on coming Saturday.
Meanwhile, the Independent Election Commission and Electoral Complaints Commission have signed a memorandum of understanding (MoU) to prevent interfere in one another’s affairs.
IEC chairwoman, Hawa Alam Nurstani, said that they will not allow foreign interference in their affairs to ensure transparency in the vote.
While the election is approaching, IEC has yet to recruit temporary staff in some provinces.
IEC commissioner Mawlana Abdullah said that the process will be completed soon, however, election watchdogs have warned that delay in recruiting workers could create major challenge during voting day.
According to IEC, 113 institutions have applied for observing the vote, a figure experts say is not enough.
Experts blame lack of funds for election watchdogs and security threats for reduction in election observers.
Sunday 22 September 2019 17:52
Story Code: 191976 Copy text available
Featured news
Mawlavi Niazi dies of wounds from mosque explosion in diplomatic area of Kabul city
AGO Probes Embezzlement Reports at Jamhuriat Hospital
German Foreign Minister Stresses the Importance of Peace Process in Afghanistan
Man who Killed 2 US Soldiers Freed After Serving Partial Term
COVID-19: Two Pakistani Inmates Die in Bagram Prison
Taliban Chief Mullah Hibatullah Akhundzada may have died of coronavirus: Report
1
Protests flare across US over police killing of African Americans
2
UN Security Council ‘will not Lift’ Taliban Sanctions: Russian Envoy
3
NATO Deputy Secretary-General: ‘Fully Committed’ to Afghanistan
4
Taliban Rubbishes Claim of ‘Turmoil, Infection and Discord’ Among Senior Leaders
5
US Special Ops to use AI to Understand and Influence Local Populations
6
If Trump is serious about getting out of Afghanistan, he should do it now, not next summer
7
Taliban reacts to Kabul bombing which killed 2 employees of a TV station dead
8
Over 2,700 Taliban, 420 government prisoners released so far
9
Names of members of reconciliation council to be finalized next week: Abdullah
10
Two killed as TV vehicle bombed in Kabul