Ghani Asked To Apologize For Comments On Marshal Fahim

President Ashraf Ghani was asked to apologize for his comments regarding the late vice president, Marshal Mohammad Qasim Fahim, who died in March 2014, from illness. 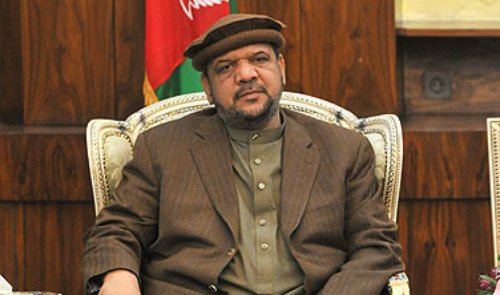 Ghani said at a campaign rally this week that as finance minister he rejected a request by Fahim to fund Fahim’s private military force.
He also said that Fahim asked him to exempt two vehicles from taxes, but he refused to do so.
“He (Marshal Fahim) asked me to pay salaries for his 500,000 soldiers. I told him ‘you don’t even have 50,000 soldiers, and I will not pay you.’ I did not pay him a salary for a year. Ultimately, he came and told me that ‘you do not have an interest in force, money or women. How can I deal with you?’ I told him to (deal with me) formally,” Ghani said at a campaign rally in Kabul this week.
Fahim’s supporters at a news conference in Kabul on Sunday said the remarks are a dishonor to Marshal Fahim.
“We request the government and the president apologize to the great nation of Afghanistan,” said Mahfooz Safi, deputy head of Kapisa Provincial Council.
They said Ghani’s remarks are “demagogic” and “irresponsible.”
“Ghani’s activities at the presidential palace have been spread with corruption, discrimination and injustice. The people of Afghanistan will never forget Ghani’s crimes committed in the name of justice,” said Sayed Abdullah Hashemi, head of Majma-e-Milli Afghanistan, a political and social foundation based in Kabul.
“No one, even if it is Ghani or another person, is allowed to talk about a person who was the only marshal of Afghanistan and whose impact on the current system in Afghanistan has been clear to everyone,” said Atifa Mohammadi, a supporter of the late Fahim.
“Any two-passport holder cannot be called an Afghan while they have an American passport. We will not allow this from anyone,” said Nasir Ahmad Kohbandi, an advisor to Chief Executive Abdullah Abdullah.
Meanwhile, former President Hamid Karzai in a statement reacted to the “inappropriate” remarks by President Ghani and said Marshal Fahim was a patriotic personality and a person with dignity.
“As a vice president, during two rounds of my presidency and before that, Marshal Mohammad Qasim Fahim was a person with dignity, a patriot, and he was committed to national interest and unity among Afghans,” Karzai said in the statement.
Marshal Fahim was a key commander under Ahmad Shah Massoud, a national hero during the fight against Soviet occupation in the 1990s. He succeeded Massoud as the leader of the Northern Alliance after the latter’s assassination in 2001.
After the Bonn Conference on Afghanistan in 2001, Marshall Fahim served as defense minister in Karzai's temporary government. And he was awarded the rank “marshal” –the highest military rank--in appreciation of his service to Afghanistan.
He served as vice-president from 2002 to 2004, and again from 2009 until his death in 2014.
Sunday 22 September 2019 18:35
Story Code: 191982 Copy text available
Featured news
Saleh: 4.2B AFN Spent On Security Of Senior Officials, Some Of Whom Weaken The System
African Telecom Giant MTN Exiting Afghanistan And Middle East
COVID-19: MoPH Reports 108 New Cases As Testing Increases Once More
OPEC daily basket price stood at $45.34 a barrel Wednesday
Gunmen in Baghlan Torch 2 Fuel Tankers, Hijack 7
Turkmenistan president sends COVID-19 tests to Afghanistan
1
Afghanistan Calls On Turkey To Take Action Against People Who Unfurled Taliban Flag
2
MoI: Taliban Violated Eid Ceasefire And Killed 20 Civilians
3
Afghan NDS Kills Daesh Intelligence Head in East
4
Kabul Delegation in Kandahar to Probe Spin Boldak Clash
5
Beirut blast: Iran says ready to help Lebanon in any way necessary
6
Afghan parliament speaker calls Loya Jirga on Taliban prisoners 'illegal'
7
Jalalabad Prison Secured, Fighting Continues in Nearby Building
8
SIGAR: Humanitarian Disaster Looms In Afghanistan With One Of The Highest Positive Rates In The World
9
Trump: US Troops 'Probably' Down to 4,000-5,000 by Election Day
10
‘India recruited three Afghan warlords against Pakistan’