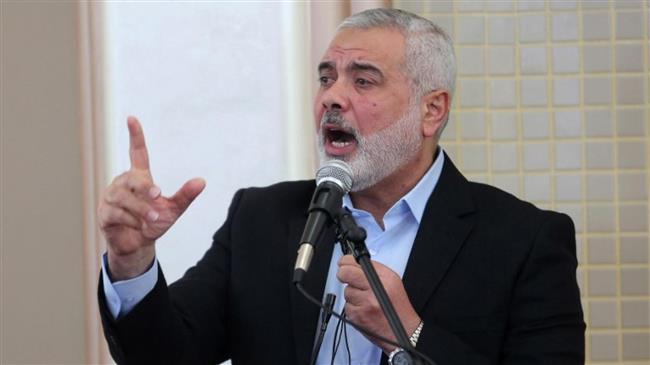 “I am fully responsible for what I say — the plans to divide the Aqsa Mosque will fail, and we will never allow the occupation to implement its plots and change the character of Jerusalem even if we sacrifice ourselves,” said Ismail Haniyeh, the head of Hamas’ Political Bureau, as quoted by the Palestine Information Center on Sunday.
The top Hamas official, whose remarks were televised by the al-Aqsa satellite channel on Saturday, also emphasized the necessity for a wise and courageous national plan to confront Zionist practices in Jerusalem al-Quds, which he described as the core of the conflict with the occupying regime.
“Despite all the challenges, we are heading toward victory,” Haniyeh further said, saluting all the Palestinians in the city for standing in the face of the Zionist occupation.
Palestinians want the occupied West Bank as part of their future independent state, with East Jerusalem al-Quds as the capital of their future sovereign state.
In December 2017, US President Donald Trump recognized the whole Jerusalem al-Quds as the “capital” of Zionist regime. The US president also moved the American embassy from Tel Aviv to the Zionist-occupied city in May 2018, triggering waves of protest rallies in the occupied West Bank and the besieged Gaza Strip, where the Hamas is based.
Palestinians have held weekly rallies to protest the siege on Gaza and demand the right of the refugees who were forced to leave during the 1948 creation of the Zionist regime to return to their homes.
More than 310 Palestinians have so far been killed by Zionist forces ever since anti-occupation protest rallies began in Gaza on March 30, 2018. Over 16,000 Palestinians have also sustained injuries.
Gaza has been under the Zionist siege since June 2007, which has caused a decline in living standards.