Pakistani marchers head for Islamabad in challenge to Imran Khan

Opposition protest organised by hardline religious party may bring as many as 100,000 people to the capital 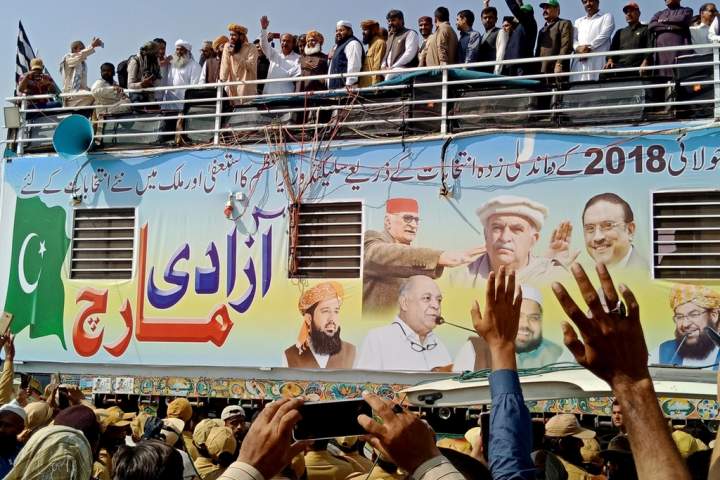 Thousands of protesters are on converging on Pakistan's capital to demand the removal of Imran Khan, in a mass march seen as one of the first major tests of opposition power since the prime minister took office last year.
The Azadi march led by the hardline religious Jamiat Ulema-i-Islam-Fazl (JUI-F) party set off in convoys from different points across the country on Sunday and is expected to arrive in Islamabad on Thursday.
The march is backed by other opposition parties who accuse Mr Khan of running an incompetent and illegitimate government that they allege came to power through military backing and a fraudulent election.
Opposition leaders hope to capitalise on public discontent over a plummeting rupee, high inflation and painful tax hikes brought on by economic headwinds.
“The country's survival is in jeopardy right now,” the JUI-F leader Fazl-ur-Rehman told crowds in the southern city of Sukkur on Monday. “The country's economy is sinking.”
He went on: “All political parties and organisations and individuals affiliated with every sector are fed up with this government, whether journalists or doctors, lawyers or businessmen. All want to get rid of this oppression.”
Before his election, Mr Khan harnessed similar street power to hold marches and sit-ins that sapped support for the previous government. Analysts say JUI-F has a strong local network of religious schools and grass-roots groups which could mobilise a large turnout in Islamabad. Some estimates have suggested the march could bring 100,000 people to the capital.
But unlike Mr Khan, the opposition march does not appear to have the support of the powerful military establishment, the analysts said.
The organisers struck a deal with the authorities at the weekend, agreeing that the march would not be allowed to enter the heart of the capital where government buildings are located. Instead it will gather near a highway outside. Police have placed shipping containers beside the main roads into Islamabad in case they need to block access.
Mr Khan said on Monday that he would not be blackmailed by the opposition.
The former cricketer swept to power in a general election last year after campaigning to do away with Pakistan's corrupt elite and clean up the country's politics. The opposition claim he benefited from the support of the military which has ruled the country for much of its existence. The military denies meddling in democracy.
The opposition has since struggled to unify. Its leaders have been jailed, or held in custody in anti-corruption investigations that the opposition alleges are intended to silence dissent. Media channels have been banned from giving airtime to opposition figures.
Mr Khan's first year has been dominated by a balance of payments crisis and an economic slump. His government has been forced to go to the International Monetary Fund for a $6 billion (Dh22bn) bailout. The lender has insisted on painful economic reforms, including widening the tax net, devaluing the rupee and cutting subsidies to state industries.