Afghanistan’s Chief Executive Abdullah Abdullah has harshly criticized a peace proposal by his election rival and incumbent President Ashraf Ghani as a “wishlist,” amid efforts to revive stalled talks between the US and the Taliban militant group. 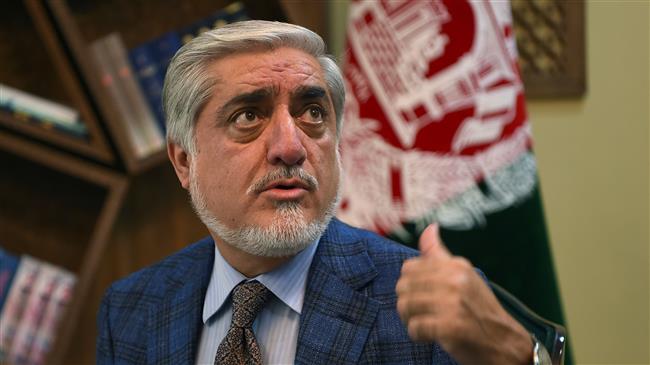 “To be honest, nobody has taken that so-called seven-point plan as a plan... it’s rather a wishlist,” Abdullah said in an interview with AFP in his sprawling official compound next to the presidential palace in the center of Kabul on Tuesday. “Nobody is taking it seriously — neither the people of Afghanistan, nor anybody [else].”
Last month, President Ghani, whose administration was kept out of the US-Taliban talks, released a seven-point proposal meant to build on those talks and bring an end to Afghanistan’s nearly two-decade-long war.
Under the plan, the Kabul government would not seek any more unconditional negotiations with the Taliban and would require that a ceasefire last at least one month before initiating any peace process with the militant group.
While some observers have praised aspects of the detailed proposal, they have questioned whether a call for a month-long ceasefire before the talks resume is feasible.
Abdullah said it was imperative for any future talks to include negotiators from the Afghan government, be it led by him or by Ghani.
Any negotiating team “has to be inclusive. Government has to be a part of that.”
In the past year, US Special Representative for Afghanistan Reconciliation Zalmay Khalilzad held nine rounds of negotiations with the Taliban in Qatar, where the militant group has a political office.
An agreement appeared imminent in early September, but a new wave of violence and the death of a US soldier made US President Donald Trump suddenly call off the talks. The White House also canceled a truce signing ceremony at Camp David of which few had been aware.
President Ghani had censured the draft deal.
The US-Taliban negotiations centered on the US’s withdrawal of its troops from Afghanistan.
More than 14,000 US troops remain in Afghanistan and Trump has repeatedly expressed his frustration with their continued deployment. US forces have remained bogged down there through the presidencies of George W. Bush, Barack Obama, and now Trump.
The question of the presidential election
Abdullah also assured he would “absolutely” respect the result of the recent presidential election — if the process is fair and transparent, even as he has already claimed victory.
The election was held on September 28. Two days later, Abdullah claimed victory against Ghani.
The Independent Election Commission (IEC) has failed to communicate to the public what is happening in the counting process, Abdullah said in the interview, and “they have not explained it transparently to our representatives... more transparency is needed.”
On Monday, his team said problems remained with roughly 300,000 of the 1.8 million ballots that the IEC has said are valid.
Abdullah also accused Ghani of prioritizing his grip on power over peace.
He claimed that the president had proven himself to be a divisive figure who failed to live up to his promises, including his pledge to root out an alleged corruption endemic in the Afghan government.
Ghani’s office has yet to comment on Abdullah’s remarks.
Abdullah is seeking the presidency for the third time, after losing in 2009 and 2014.
Tags:
US-Taliban talks Afghan presidential election Presidential elections Abdullah Abdullah
Source : خبرگزاری Herat Afghan Voice Agency(AVA)
Wednesday 6 November 2019 00:03
Story Code: 194873 Copy text available
Afghan IEC delays preliminary poll results announcement
2019 will be 'decisive' in Afghan settlement: Russia
The Afghan government is failing to deliver on its promises
Afghan Taliban, US talks in Qatar to continue in future: ex-Taliban minister
Pompeo Hails ‘Significant Progress’ In US-Taliban Talks
Featured news
MoPH Says COVID-19 Cases Decreased By 40% As Tally Reaches 33,908
Reporters Without Borders Condemns Arrests, Harassment Of Journalists
Oil prices down with surprise rise in US crude stocks
Taliban: ‘Anti-Peace’ Circles Drawing Links To Uzbek Jihadist Group
12 Taliban insurgents killed in Paktia clashes
Dispute Over 592 Taliban Prisoners Solved: Source
1
‘Russian bounties’: payback or White House incompetence?
2
Taliban needs to end violence to help kick start intra-Afghan talks: NATO envoy
3
Russian diplomat says some members of US intelligence involved in Afghan drug trafficking
4
Each Afghan province will have a female deputy governor
5
Pakistan invites chief Afghan peace negotiator Abdullah
6
Iraqis rally to decry Saudi paper’s offensive cartoon of Ayatollah Sistani
7
Pak FM talks to Chinese Counterpart; Discusses Afghan Issues
8
Ghani appoints new governors for five provinces of Afghanistan
9
Telephone Conversation between the Acting Foreign Minister and the British Ambassador to Afghanistan
10
The Haqqani Network and the failing US-Taliban deal