The peace process in Afghanistan should be led by the Afghan government and Afghan people, said Sima Samar, state minister for Human Rights and International Relations. 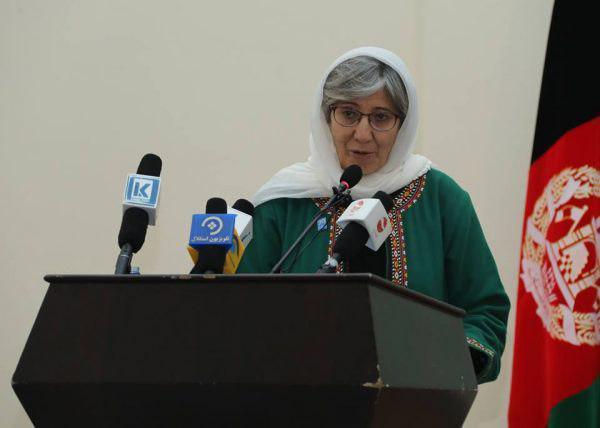 Speaking at a peace meeting yesterday, November 06, Ms. Samar said any peace plan that is not made according to requirement of Afghanistan will not ensure sustainable peace in the country. “The plan should be designed in a way to be applicable and implementable in Afghanistan,” she stated.
The plan to be developed on the basis of social realities of Afghanistan, and that people of different ethnicities should be involved in the process, she emphasized.
Ms Samar, who is the former head of Independent Afghanistan Human Rights Commission, underlined that the plan should reflect the aspirations of the Afghan people so they would contribute to its implementation.
She urged the Afghan government and political figures to stay united in the peace process.
Ms. Samar talks about making a peace plan in Afghanistan came while President Ghani recently proposed a seven-point plan for peace negotiation with the Taliban. The plan says a month-long ceasefire should be precondition to peace talks.
The plan was publicized short after an intra-Afghan peace dialogue with the Taliban was postponed indefinitely that was set to be nheld in the Chinese capital, Beijing, in late October.
Citing an unidentified source, the Associated Press reported on October 26 that the postponement would be brief but no new date was given.
Tags:
Sima Samar stresses on applicable peace plan
Source : Afghan Voice Agency(AVA)
Thursday 7 November 2019 16:24
Story Code: 195055 Copy text available
Featured news
Afghanistan Schedules Meetings To Prepare For Intra-Afghan Talks
Pakistan Opens Two More Border Crossings For Trade With Afghanistan
It will be clear next week when talks with Taliban will begin: Ghani
Pakistan Army Rubbishes India Claims of Troop Deployment in Gilgit-Baltistan
It will be clear next week when talks with Taliban will begin: Ghani
COVID-19: Long-Shut Oxygen Factory Gives Free Refills In Kabul
1
Floods Threaten 1.3 Million Afghans
2
Deadly child malnutrition rises in Afghanistan at alarming rate: UN
3
Azerbaijan sends aid to Afghanistan to fight against coronavirus
4
US space agency NASA to pay the public for designing a space toilet for the Moon
5
COVID-19: 271 New Cases Reported In Afghanistan; Tally At 31,238
6
Global COVID-19 Death Toll Exceeds Half A Million As Cases Surge
7
'Worst is yet to come': WHO chief advocates for solidarity to fight the coronavirus
8
COVID-19: Afghanistan Sees Increase in Fresh Cases as Tally Surges Close to 31,000
9
MEC Reports Corruption In Customs And Revenue Departments
10
COVID-19: Afghanistan Not Testing Samples At Full Capacity