U.S. forces won’t be withdrawing from Afghanistan any time soon, according to Chairman of the Joint Chiefs of Staff Gen. Mark Milley, who said Sunday the mission in America’s longest war will likely “be ongoing into the future for several more years. 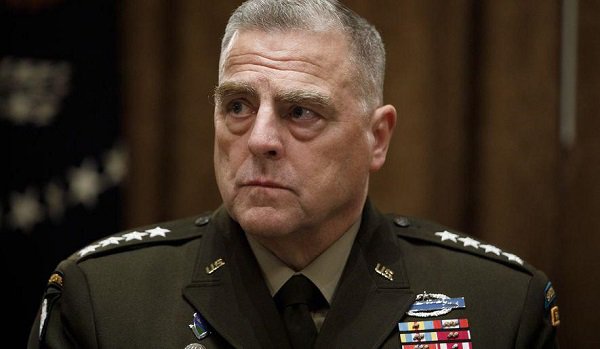 Milley noted that he doesn’t expect the mission to be completed anytime soon.
The effort to prevent Afghanistan from being a safe-haven for terrorists plotting attacks on the U.S. homeland is “ongoing” and has “been ongoing for 18 years,” Gen. Milley told ABC’s “This Week” in an interview a day before Veterans Day celebrations in the United States.
“We went there in order to make sure that Afghanistan never again would be a haven, a safe-haven for terrorists that would attack the United States,” he said. “That mission is not yet complete and in order for that mission to be successful, the government of Afghanistan and the Afghan security forces are going to have to be able to sustain their own internal security to prevent terrorists from using their territory to attack other countries, especially the United States.”
There are some 14,000 U.S. troops in Afghanistan, as well as thousands of European forces participating in the NATO-led Resolute Support mission.
While his comments fit with the Trump administration’s stated posture toward the Afghan war, the joint chiefs chairman’s message may be seen to run counter to President Trump’s oft-stated claim to be getting America out of so-called “forever wars.”
Mr. Trump has touted the claim to supporters in light of his recent decision to draw down the number of U.S. forces in Syria.
Gen. Milley told ABC that Americans should think back to “the original reason why were are in Afghanistan to begin with, which is 9-1-1.”
Milley said U.S. troops will remain in the Middle Eastern country “for a significant amount of time because it’s in our national interest to be there to help out.”
The general said he expected American troop levels in Syria to stabilize at around 500, insisting that pressure must be maintained on fighters of the Islamic State (IS) extremist group.
Tags:
US Troops To Stay In Afghanistan Several More Years: Joint Chiefs of Staff Chairman
Source : Afghan Voice Agency(AVA)
Monday 11 November 2019 09:41
Story Code: 195324 Copy text available
Featured news
UAE firm to invest in 3,000 MW solar power project in Afghanistan
Women and children among 10 killed, wounded in Kandahar roadside bomb explosion
Afghanistan, US, Uzbekistan Discuss Trilateral Cooperation
Russia receives orders from 20 countries for ONE BILLION doses of world’s first Covid-19 vaccine
Pompeo Says He Warned Russia Against Offering Bounties for US Soldiers
21 Civilians Killed in 10 Days in Arghistan District of Kandahar: AIHRC
1
Loya Jirga decides that 400 hard-core Taliban prisoners should be released
2
9 members of a single family wounded in Taliban mortar attack in East of Afghanistan
3
US to cut troop levels in Afghanistan
4
Terrorists trained by Pakistani commandos in Afghanistan planning attacks in Kashmir: Report
5
Nabil: Pakistan Is Never Trustworthy
6
U.S. plans to withdraw more than 4,000 troops from Afghanistan by end of November
7
Intra-Afghan Talks to Begin on August 16 in Doha: State TV
8
Pakistan steadfast for inclusive Afghan settlement: FM
9
Taliban expresses readiness to hold peace talks with Afghan govt
10
Khalilzad Expects Prisoners' Release in 'Next Few Days'