Turkey ‘will go on with Russian S-400 purchase’

A senior aide to Turkey’s President Recep Tayyip Erdogan says the country is determined to go on with the purchase of Russian S-400 missile defense systems, despite threats of sanctions by the United States. 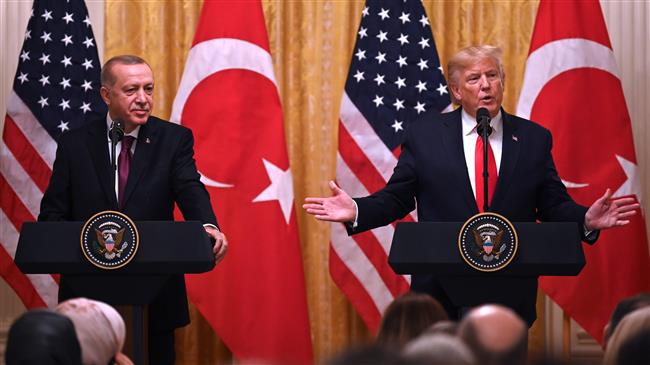 Ibrahim Kalin made the remarks on Friday, two days after Erdogan and US President Donald Trump met in Washington and discussed differences between the two countries, including over Turkey’s purchase of the S-400s.
Ankara and Washington have been at loggerheads over Turkey’s purchase of the Russian systems, which the US says are not compatible with the military hardware owned by the other countries of the Western military alliance of NATO and pose a threat to Lockheed Martin F-35 stealth fighter jets.
In reaction, Washington has canceled the sales of F-35s to Ankara and removed it from a multinational program producing the aircraft.
Kalin told broadcaster TRT Haber that Turkish and American officials had started work as part of a mechanism to assess the impact of the S-400s on the F-35 jets on Friday.
Erdogan rejected a demand made by the US to abandon the S-400 contract during his meeting with Trump, calling that request unacceptable and an infringement of Turkey’s sovereign rights.
Turkey’s Defense Ministry announced in a statement on September 15 that the delivery of the second battery of S-400 missile defense systems had been completed, and that the systems would become operational in April 2020.
A high-ranking Russian military figure said that Russian specialists were currently training Turkish personnel to operate the S-400 missile defense systems that have already been delivered, and that a new deal was under discussion.
The S-400 is an advanced Russian missile system designed to detect, track, and destroy planes, drones, or missiles as far as 402 kilometers away. It has previously been sold only to China and India.
Ankara seeks to boost its air defense, particularly after Washington decided in 2015 to withdraw its Patriot surface-to-air missile system from Turkish border with Syria, a move that weakened Turkey’s air defense.