Taliban Leader Agrees to a 7-Day Reduction of Violence: Source

The Taliban leader Mullah Hibatullah Akhundzada has agreed to a seven-day reduction of violence in Afghanistan on condition that a peace deal is signed, sources familiar with the process have said on condition of anonymity. 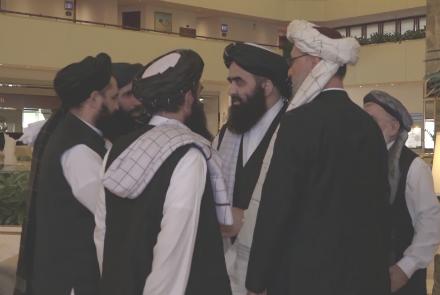 The Taliban leader has said that the reduction of violence in major cities of Afghanistan will be implemented once the US signs the peace deal, which must include a plan for the withdrawal of foreign forces, the sources said, quoting Taliban officials.
“The religious scholars have suggested that Mullah Hibatullah agree to a seven-day reduction of violence on condition that the US sign the peace agreement during these seven days,” said Sami Yousufzai, a freelance journalist.
According to the sources, if the reduction of violence is implemented, the Taliban will not attack the cities, they will not launch suicide attacks and will not block major highways.
Former President Hamid Karzai, on the other hand, speaking at the Raisina Dialogue conference in India, said that the US efforts in the Afghan peace process are hopeful.
“Yes, we in Afghanistan hope that the new American initiative for peace will work and be supported,” said Karzai.
But the Afghan government still insists on a ceasefire.
Hamdullah Mohib, Afghanistan’s National Security Adviser, on Wednesday at the Raisina Dialogue multilateral conference in New Delhi, said that “Peace for our people means the end of violence – this is why we insist that a ceasefire is necessary to create a conducive environment for talks.”
“First, and most importantly, peace in our land is long overdue. People still long to see a day where they can send their children to school and visit friends without the persistent fear that they might be the target of terrorism,” said Mohib.
He also said that a ceasefire is a catalyst for sustainable peace because the Afghan people earnestly want it, and it will prove to the Afghan people and government that “our enemies are not only serious about peace, but that it is within their control to maintain their part of a future deal.”
Mohib said that President Ghani has urged neighbors and partners to seek peaceful resolution to violent circumstances – not just because Afghanistan's own national interests require it, but because these principles are enshrined in the UN Charter and they have been the basis of international cooperation for generations.
The Afghan government has said that it has formed a senior coordination committee on peace.
President Ashraf Ghani in a decree has said that all actions and stances on peace should be carried out in coordination with the state Ministry on Peace Affairs.
“The committee which is led by the State Ministry on Peace Affairs will be coordinating efforts between 14 government entities involved in the peace process,” said Najia Anwari, spoeskwoman for the State Ministry on Peace Affairs.
Sources familiar with the US-Taliban talks in Doha have said that no precondition was set for the Taliban to cut their ties with Iran or agree on partial presence of US troops in the country after a potential peace agreement.
Meanwhile, Russia’s special envoy on Afghanistan Zamir Kabulov has said that the Taliban in principle have agreed on a ceasefire.
"They (the Taliban) in principle agreed for preliminary ceasefire even with the government, but after signing…it will create environment for intra-Afghan talks including Taliban, because we believe Taliban are also part of Afghan society, they will start talking and they will work out new modalitie
Tags:
Taliban Leader Agrees to a 7-Day Reduction of Violence: Source
Source : Afghan Voice Agency(AVA)
Thursday 16 January 2020 09:31
Story Code: 200849 Copy text available
Increased Domestic Energy Generation through Renewable Sources
Key Taliban members among casualties in Pakistan blast: sources
Pakistani delegation visits Kabul 'to offer apology': source
At Least 87 Wounded In Cemetery Blast, Up To 20 Dead: Sources
Taliban Agrees to Short-Term Reduction of Violence: Source
Featured news
Afghan peace treaty signed in the presence of Pakistan: Shah Mehmood
Memorial monument for media martyrs in less than a month: Sharq
First-ever Afghan Freight Train Leaves Karachi for Kandahar
China Has Done Tremendous Job in Containing the Virus: Afghan Amb.
Iran urges U.S. to withdraw troops from Afghanistan after peace deal announced: Newsweek
Civilians celebrate as partial truce mostly holds in Afghanistan
1
Prominent Taliban leader killed in Afghan forces operation in Badakhshan province
2
Air raids kill 4 IS militants in eastern Afghanistan
3
Afghans anxious as election results are disputed after US-Taliban deal
4
Afghan- Americans joint work on violence reduction
5
Afghan election results fuel tensions in the country
6
Zalmay Khalilzad, Josep Borrell discuss taliban deal with Ashraf Ghani
7
Afghan Government to form inclusive negotiating team for peace talks, Arg
8
India Congratulates President Dr. Ashraf Ghani on his re-election as President of Afghanistan
9
Airstrikes, Special Forces raid kill 6 IS-K terrorists in Kunar: MoD
10
Taliban declared the Afghan election results illegal in a statement