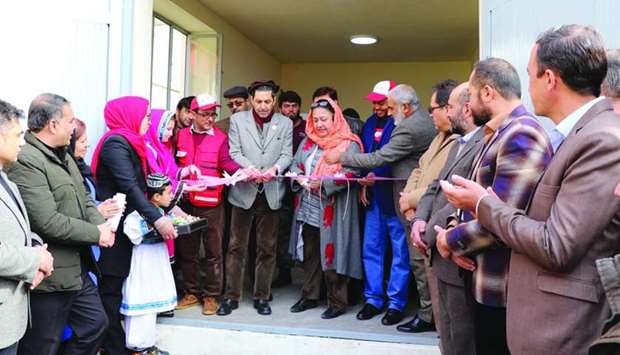 Serving the asylum’s 700 residents, the new central heating system would alleviate their suffering in the cold weather as well as the health consequences of the winter, ensure convenient and humane living conditions and help avoid the risks of traditional ways of heating such as fire, QRCS said in a statement.
ARCS has five asylums in Kabul, Kandahar, Herat, Balkh and Nangarhar.
There are plans to establish more asylums in underserved provinces such as Kunduz.
These humanitarian projects face challenges such as meagre resources, inadequate infrastructure and low living conditions, particularly during the winter.
The opening ceremony was attended by officials and community leaders, including Dr Nilab Mobarez, secretary-general of ARCS.“This project would improve the living conditions of the inmates and spare them the negative outcomes of using traditional ways of heating,” she said.“It is a healthy and environment-friendly project”.Dr Mobarez thanked QRCS for making this project a reality, as well as the many other humanitarian projects in diverse sectors across the country.
Dr Mirwais Akram, undersecretary-general of ARCS, thanked QRCS for their contribution to the project, which met the needs of vulnerable persons.
He commended the efforts made and congratulated the beneficiaries for having such a vital demand for a modern heating system achieved.
The war-torn country has experienced recurrent drought, floods, earthquakes, landslides and other natural disasters that have weighed heavily on the already broken-down infrastructure, let alone lack of basic services and mass displacement, the statement notes.

Reports by the United Nations Office for the Co-ordination of Humanitarian Affairs (OCHA) show that Afghanistan is second among 189 countries in terms of limited capacity and resilience.
Around 39% of the population live below the poverty line.
As a result of the recent waves of refugees return from neighbouring countries, more than 400,000 returnees need humanitarian aid, according to OCHA’s Humanitarian Response Plan.
Under a memorandum of understanding between QRCS and ARCS, the two-month project supplied water boilers, pumps, power generators, metal radiators, logistics and other equipment.
The heating unit facility is divided into two sections, one for the boilers and the other for the generator.
Underground steam cycle pipes were extended to all the rooms and corridors of the accommodation buildings.
Amin M Afdal, an inmate with an eight-member family, was excited because her kids would finally feel warm during the freezing season.
She thanked the donors and personnel who secured heating for them.
Bahram Nour-ul-Din, a 12-year-old from Takhar, lives with another four children in the same room.
“I am very happy with this,” he said.
“The room used to be filled up with smoke from the burning wood, and we would become ill. Thank you QRCS for your care. I wish to have those things of sports and be playing, too."