Palestinians Mobilize against Trump’s “Deal of the Century”

Palestinians staged protests Tuesday against US President Donald Trump’s Middle East peace plan, hours before it was to be unveiled in Washington. 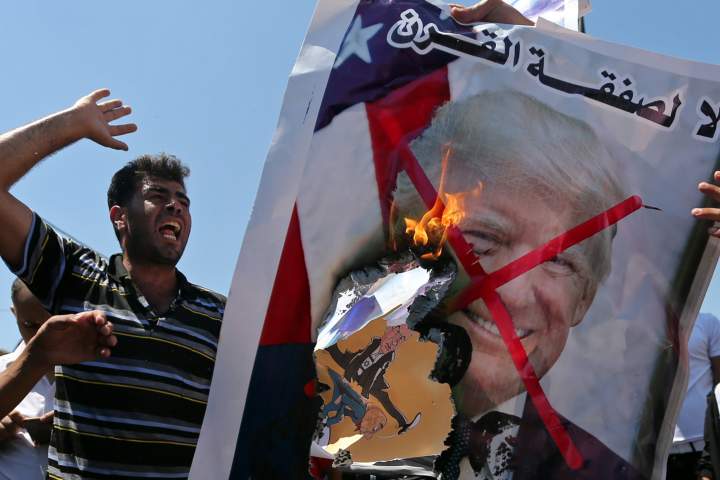 Thousands demonstrated in Gaza, burning pictures of Trump and the American flag, while further rallies were planned for tonight and the coming days.
Details of the initiative, also known as the “Deal of the Century”, remained under wraps, but leaked reports say it will heavily favor the Zionist entity, whose Prime Minister Benjamin Netanyahu was to attend the White House unveiling.
Hamas Joins Fatah Meeting
In a rare event, rival Palestinian factions Hamas and Fatah agreed to meet in the West Bank city of Ramallah to discuss a response to Trump.
“We invited the Hamas movement to attend the emergency meeting of the leadership and they will take part in the meeting,” senior Palestinian official Azzam al-Ahmed said.
Hamas official Nasser al-Din al-Shaar confirmed he would attend the meeting, which all Palestinian factions were invited to.
“The meeting will discuss the position that must be taken (against) Trump’s plan,” Shaar said.
Palestinian resistance factions also voiced firm rejection to the plan, with Resistance Committees issuing a statement calling for Palestinian unity and stressing that the resistance will manage to overthrow the so-called “Deal of the Century”.
Details on the Plan
Trump was due to release his plan, in preparation since 2017, at the White House together with his close ally Netanyahu, who is battling corruption charges which he denies and campaigning for March 2 elections.
The Palestinians, who accuse Trump of pro-Israel bias after his administration has unwaveringly backed Zionist objectives, were not taking part in the Washington event.
And Trump’s vision of the so-called “peace” is almost certainly a non-starter for most Palestinians, including those in the Jordan Valley, a strategically vital area that constitutes around 30 percent of the West Bank.
Trump’s plan may seek to give the Zionist entity the green light from Washington to annex the Jordan Valley, which is home to around 65,000 Palestinians, according to the Israeli anti-occupation NGO B’Tselem.