Taliban Must Not Raise Issues With Delegation: Omar

The Afghan government has already done its part, it is up to the Taliban now to show its will for peace, said Omar. 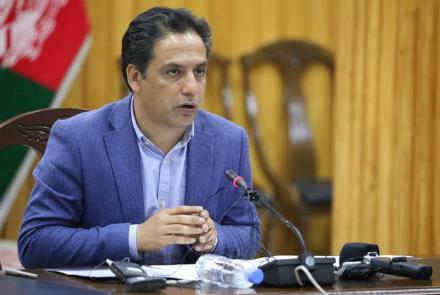 Wahid Omar at a press conference on Sunday in Kabul responded to the Taliban statement about the Afghan peace delegation being "against the agreement between the Taliban and the US," saying the Taliban must not raise issues with our delegation, as we also can raise issues with theirs.
All the prisoners released at one time would be not possible, and there are conditions, Omar said, adding that the delegation that has been announced will represent “a united Afghanistan.”
“We have never said what kind of Taliban should form a delegation, so we are asking the Taliban to not make an issue out of it,” he said.
“We hope that the Taliban also forms their delegation and the intra-Afghan talks can start,” he said.
Earlier the Taliban released a statement saying that the group has some reservations about the peace negotiating team formed by the Afghan government and that the Afghan government can take part in the intra-Afghan talks "only as a side like other Afghan factions."
“The team announced by the (Afghan govt) is...against the peace agreement between the Taliban and the US,” said the Taliban statement.
“In order to reach lasting and real peace, this should be formed with the agreement of all sides, so that it can represent others too. But it looks like other sides are not satisfied with the team announced,” the statement said.
On Satuday, the US Secretary of State, Mike Pompeo in a tweet on Saturday said that he his “thankful to his Afghan counterparts for preparing an inclusive negotiating team for intra-Afghan negotiations,” and urged them to also form an inclusive government.
“I also applaud your commitment to begin releasing prisoners and your commendable effort to set conditions for peace and reconciliation,” he said.
Tags:
Taliban Must Not Raise Issues With Delegation: Omar
Source : Afghan Voice Agency(AVA)
Sunday 29 March 2020 13:46
Story Code: 206403 Copy text available
This Man Is Revered Among the Taliban. Can He End the Afghan War?
‘Taliban, U.S Special Envoy Have Told Me They Want To Restart Talks’: Kabulov
Ghani says Insurgents Intensify Violence to Gain Benefit at the Table
HPC Delegation to Visit Pakistan Next Week
Muslim congresswoman vows to fight Trump's 'destructive' policy
Featured news
325,000 Afghan refugees returned home over past four months: ministry
Turkey and Pakistan to ‘Enhance’ Bilateral Cooperation Against COVID-19
Afghanistan Reports 658 New COVID-19 Cases
Russia: 4 servicemen killed in helicopter hard landing
162 New COVID-19 Cases Reported in Herat and Balkh
US Welcomes Ghani's Pledge to Release Prisoners
1
Findings from Afghanistan war crimes investigation will cause 'distress' for some elite soldiers, judge warns
2
US and Iran attend Six Plus Two meeting on Afghanistan
3
‘Key' Taliban Member Arrested in Herat by NDS
4
Taliban Killed, Wounded 576 Afghan Civilians In 30 Provinces During Ramadan: ONSC
5
Airstrike kills 6 Taliban militants a day after similar raids killed 31 in Jawzjan
6
Peace Talks Ensure Afghanistan not a ‘Safe Harbour’ for Terrorists: US State Department
7
Around 2,000 Taliban prisoners to be released
8
Afghan leaders condole deaths in plane crash in Karachi city of Pakistan
9
US Secretary of State Urges Afghan Gov’t, Taliban to Refrain From Violence After Eid Ceasefire
10
Pentagon Report Suggests the US-Taliban Deal Was Inked in Afghan Blood