Special envoys of Russia, China, Iran and Pakistan discussed Afghanistan’s situation and peace process, the envoys said in in a joint statement on Monday. 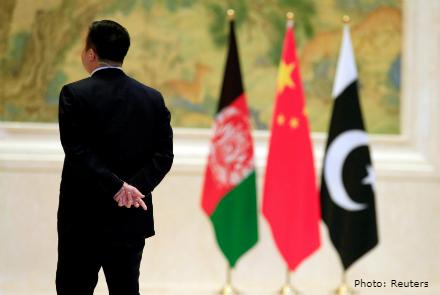 The statement welcomed the agreement between two main Afghan political leaders and expressed “hope that this important event will expedite the start of intra-Afghan negotiations.”
On Sunday, President Ashraf Ghani and his political rival Abdullah Abdullah signed a power-sharing deal after months of political discord that critics say could have pushed the country towards a new crisis if not resolved.
The political tension emerged as a consequence of the disputed presidential election of last year, the results of which were announced in February. As a consequence, the two leaders, Ghani and Abdullah, held inauguration ceremonies on the same day in their adjacent respective palaces.
Ghani was declared president by the Independent Election Commission after earning a slightly higher percentage than his rival Abdullah.
The nations' envoys reiterated their respect for the sovereignty, independence and territorial integrity of Afghanistan, and the decision of its people on their future and development path.
The statement also pledged support for the “Afghan-led, Afghan-owned” peace and reconciliation process, saying that the inclusive Intra-Afghan negotiations is the only way to realize the Afghan national reconciliation, leading to a prompt end of the prolonged conflict.
The joint statement called on all Afghan ethnic groups and parties, including the Taliban, to take advantage of the opportunity and set the stage to launch the intra-Afghan negotiations as soon as possible.
“Support Afghanistan to achieve comprehensive and sustainable peace at an early date [reservation of the Iranian side: “respecting the constitution of the Islamic Republic of Afghanistan, and the constitutional rights of women as well as ethnic and religious groups],” the joint statement said.
Foreign troops should withdraw in an orderly and responsible way so that the situation in Afghanistan will experience a steady transition, the statement read.
The statement also calls for the release of prisoners and detainees held by all parties to the conflict in Afghanistan, expressing hope that "Resolution 2513(2020) of the UN Security Council can be observed and implemented.”
“Support the initiative of the UN Secretary General António Guterres for universal ceasefire and call for a simultaneous declaration of a comprehensive ceasefire throughout Afghanistan as agreed among parties to the conflict,” it said.
Concerns were expressed over the “serious terrorism threat existing in Afghanistan" and the diplomatic group urged all sides in Afghanistan to take decisive action against Al-Qaeda, Daesh, ETIM, TTP and other international terrorist organizations operating against regional countries, and to "completely eradicate the production and trafficking of narcotics in the country.”
The statement reaffirmed these nations' support for Afghanistan to overcome the effects of the COVID-19 pandemic and welcomed the international community's continued humanitarian assistance to Afghanistan.
On Afghan refugees, the statement underscored that repatriation and reintegration of Afghan refugees should be part of any peace and reconciliation process and called upon the international community to support the return of Afghan refugees with dignity and honor.
Finally, those issuing the statement agreed to maintain contact on the Afghanistan issue, and work together to advance the Afghan peace reconciliation and reconstruction process.
Tags:
Russia, China, Iran, Pakistan Discuss Afghanistan
Source : Afghan Voice Agency(AVA)
Tuesday 19 May 2020 09:57
Story Code: 210307 Copy text available
China, Russia, Iran cited by US govt as biggest 'national security threats'
Top military official: Iran, Russia, China to hold naval drills ‘in near future’
Endless unwinnable US war in Afghanistan
Qureshi to embark on 4-country tour for promoting economic cooperation
Russia, China, Iran challenging global US leadership: Pompeo
Featured news
Pullout of 8,000 Troops by November Not Only Option: Esper
Iran to Reopen Border with Turkmenistan on June 1
COVID-19: Over 350,000 Kabul Residents Exempt From Paying Water and Power Bills
Ten killed in highway crash in Faryab
COVID-19 in Bamiyan: Saighan District Fully Quarantined; Face Masks Mandatory in Cities
Afghan Futsal goalkeeper tests positive for Coronavirus
1
Findings from Afghanistan war crimes investigation will cause 'distress' for some elite soldiers, judge warns
2
Peace Talks Ensure Afghanistan not a ‘Safe Harbour’ for Terrorists: US State Department
3
Pentagon Report Suggests the US-Taliban Deal Was Inked in Afghan Blood
4
Around 2,000 Taliban prisoners to be released
5
US Secretary of State Urges Afghan Gov’t, Taliban to Refrain From Violence After Eid Ceasefire
6
How the Taliban Outlasted a Superpower: Tenacity and Carnage
7
COVID-19: More than 12,000 Cases in Afghanistan
8
Afghan government to release 900 Taliban prisoners today
9
Trumps Considering Full Troop Pullout from Afghanistan
10
Afghan security institutions reject report half of forces have coronavirus