Security sources on Monday reported a cluster of attacks by the Taliban on multiple parts of the Baghlan-Balkh highway, a key route that connects Kabul with northern and northeastern provinces. 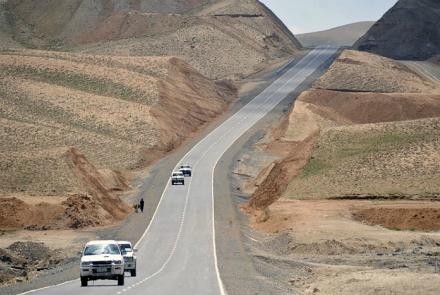 The sources said the clashes are ongoing in the Chashma-e-Shir area and on the outskirts of Pul-e-Khumri city, the center of Baghlan, leaving the highway closed to traffic.
The clashes started after the Taliban installed a checkpoint on Baghlan-Balkh highway in Chashma-e-Shir area and started “extorting funds from truck drivers," say sources.
Hundreds of vehicles have been stranded on both sides of the highway, according to eyewitnesses and passengers.
Ahmad, a passenger, said that women and children are among those stranded on the two sides of the highway and are in a bad condition.
The commander of a highway unit, Abdul Ghani Mahmoudi, said the Taliban closed the highway after launching an attack on it.
He added that Taliban have hidden in civilians’ homes and there is a need for reinforcement troops to push the militants back from the highway.
The Taliban has not commented on the attack so far.
Tags:
Northern Highway
Source : Afghan Voice Agency(AVA)
Monday 6 July 2020 16:17
Story Code: 213879 Copy text available
Featured news
50-70 percent of police positions in four Afghan provinces are ghost soldiers: SIGAR
MoPH: Dangerous For Primary School Students To Start In-Person Classes
Taliban Kill 4 Protestors Demonstrating In Khwaja Ghar District Of Takhar
Trump: US Troops 'Probably' Down to 4,000-5,000 by Election Day
Afghanistan Calls On Turkey To Take Action Against People Who Unfurled Taliban Flag
COVID-19 Latest: 36 of 187 Cases Test Positive in Afghanistan
1
Afghan NDS Kills Daesh Intelligence Head in East
2
SIGAR: Taliban ‘Harassing’ ANDSF, Al Qaeda Still Present
3
Kabul Delegation in Kandahar to Probe Spin Boldak Clash
4
MoI: Taliban Violated Eid Ceasefire And Killed 20 Civilians
5
Afghanistan saw 'deadliest' week in 19 years last month: SIGAR report
6
SIGAR: Humanitarian Disaster Looms In Afghanistan With One Of The Highest Positive Rates In The World
7
Developing: 13 Civilians Killed, 42 Wounded As Clashes Continue In Jalalabad Prison After 14 Hours
8
SIGAR: Up to 70% ‘Ghost Soldiers’ Within ANDSF Ranks
9
Jalalabad Prison Secured, Fighting Continues in Nearby Building
10
Developing: 21 Civilians Killed, 42 Wounded As Clashes Continue In Jalalabad Prison After 14 Hours