Commander of NATO Resolute Support General Scott Miller said the Taliban violence has intensified and it needs to reduce. 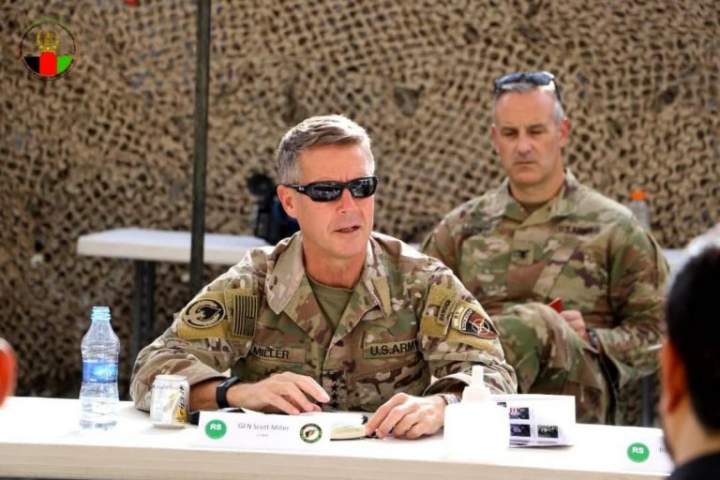 Miller accompanied acting Minister of Interior Masoud Andarabi and Chief of Army Staff (COAS) General Yasin Zia, on a trip to Kandahar on Wednesday to assess the security situation of the province.
During the trip, Miller said that the Afghan security forces have coped well.
“Although the security forces have defended well, the Taliban have intensified their attacks… The whole world is aware of this situation and the violence must be reduced,” the Kandahar governor’s office said, quoting Miller.

“The violence is too high, Taliban violence has to slow down – it has to stop, what it is driving is an increase in violence across the country,” Miller added.
According to the press statement, COAS General Zia said the Taliban had increased their attacks, including use of roadside mines.
“The Taliban are abusing the current negotiations,” he said.
Referring to the escalation of Taliban attacks, acting Interior Minister Andarabi also said that the Afghan military had responded strongly to the Taliban attacks and that the group had failed to achieve their goals.
This comes amid a revelation by Arif Rahmani, member of the Internal Security Committee of the Lower House of Parliament, who tweeted a quote by a senior security official on Thursday.
The official said that while the Afghan government maintains that they are in a state of “active defence,” they have been carrying out nine to 13 offensive airstrikes every day to clear Taliban-controlled areas.
Tags:
Gen Miller: Taliban Attacks Have Intensified, Violence Needs To Slow Down
Source : Afghan Voice Agency(AVA)
Thursday 24 September 2020 16:54
Story Code: 219528 Copy text available
Featured news
'We Backed US Forces' Presence in Afghanistan': Putin
Religious Scholars Call Current War 'Illegitimate'
‘Regional consensus can drive peace in Afghanistan’
Angry Afghans call for immediate ceasefire after Daesh
21 Gov’t Officials to Face Justice on Corruption Charges
UK’s Halo Trust hires former Taliban fighters to clear mines
1
Taliban will never win: Ghani
2
Two Romanian soldiers wounded in Kandahar IED explosion
3
Atta Noor asks India to ‘engage with Taliban without giving them legitimacy’
4
Taliban attack kills 25 Afghan security personnel
5
Trump says 19 years in Afghanistan enough
6
NATO Presence in Afghanistan Conditions-Based: Stoltenberg
7
Afghanistan says 840 Taliban militants killed in nearly one month
8
Ghani: Ask Mullah Hibatullah Why He Is Killing Afghans
9
Top al-Qaeda leader killed in eastern Afghanistan: Officials
10
Taliban abduct acting district governor in Takhar