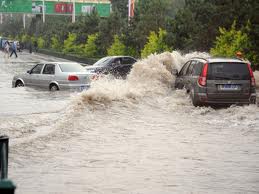 Chinese state media say torrential rains have killed at least 16 people and affected 1.5 million people in southern and northern parts of the country.

The official Xinhua News Agency said Monday that the heavy rains over the past three days had affected 450,000 people and wiped out crops in the southern Guangxi region.

Xinhua quoted a local government official as saying the direct economic losses so far were $20.3 million, and that water levels in 10 reservoirs and several major rivers had risen above warning levels.