Russia claims that the US officials are planning to replace almost 50,000 Ak-47 rifles with the US-made weapons, it has been reported. 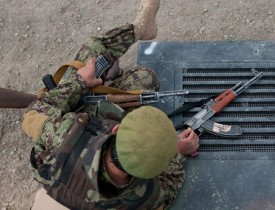 AVA- “The Americans insist that 50,000 Kalashnikov rifles with munitions that were handed over to the Afghan security forces free of charge be removed from operational use and Afghanistan buy US-made rifles and submachine guns instead,” the Russian foreign minister Sergei Lavrov was quoted as saying by TASS.

Speaking at a government-hour session at Russia’s Federation Council upper parliament house, Lavrov said “Along with a question where these 50,000 rifles are to go, and we have asked the Afghans about that, we have another question: what is the reason behind these plans to strip the Afghan army of the possibility to use weapons it is accustomed to and to make it use what it is yet to get comfortable with.”

This comes as the Russian President Vladimir Putin earlier said Russia is prepared to supply armaments and military hardware to the Afghan forces in a bid to help curb the growing activities by the international terror groups in Afghanistan.

Insisting on the need for international support to the Afghan government, Putin said “As in the previous years, we are ready to provide this support, including in the training of national law-enforcement personnel and the armed forces, supplying necessary armament systems and military hardware,” he added.