As part of its annual program to exhibit various domestic products, Afghanistan has held its 22nd agriculture and handicrafts exhibition in capital Kabul. 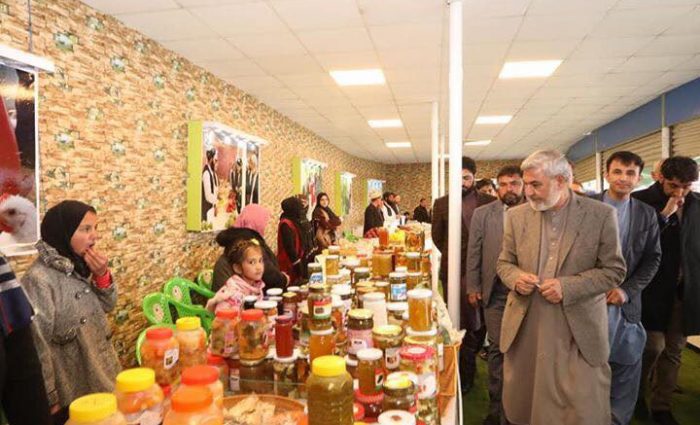 AVA- The exhibition, which was held from March 22-26 at the Badam Bagh agriculture park, a garden in northern outskirts of Kabul city, was visited by thousands of people from around the country.
Agricultural machineries were among hundreds of objects exhibited in the still non-asphalted large showplace with over 230 booths filled with agricultural products of various types as well as handicrafts mostly provided by women.
Farmers, private entrepreneurs, domestic business owners and producers from all over the country exhibited their products and handicrafts in the show which also hosted a team of singing musicians to entertain the participants and visitors.
With gravelled pathways and sidewalks crossing nearby the kiosks full of fresh fruits and vegetables, the fair was attended by the minister of agriculture and livestock and many other high-ranking government officials on the second day of Afghan New Year, traditionally called Nawroz falling on March 21.
"A total of 61 out of 230 booths have contained handicrafts from women producers and the remaining other products exhibited in the fair. The number of visitors exceeded 23,000 on the first day," Habib Behzad, information officer for the Afghan Ministry of Agriculture and Livestock told media.
Domestic producers could find their customers and discuss the price of their products with big and small companies during the five-day agricultural show, which the official said was aimed to encourage and promote the country's original produces at the national and international level, including fabrics and pieces woven and embroidered by women.
"Between 50 to 60 business women and artisans have come to display their products in the exhibition, this year," Behzad said.
"We have come and attended the big agricultural show to encourage women entrepreneurship and innovation and encourage them to work hard for their self-sufficiency," said Fayeza, director of an association supporting women entrepreneurs in western Herat province.
The Afghan government has committed to invest in agricultural sector to create job opportunities for millions of people to boost economy in the land-locked country.