The United States on Tuesday condemned recent Taliban attacks in Afghanistan as "blatant disregard" for people and institutions of the country. 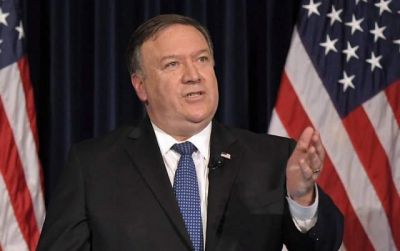 In a statement, US Secretary of State Mike Pompeo mentioned two Taliban suicide attacks in capital Kabul and Parwan province, which killed nearly 50 people on Tuesday.
The statement added that Afghanistan has endured blackouts and other challenges as a result of Taliban attacks against power transmission lines which “carried electricity to hospitals, schools, and homes in many areas of the country.”
“Through these attacks, the Taliban demonstrate blatant disregard for the people and institutions of Afghanistan,” the statement said.
Pompeo urged the Taliban to show genuine commitment to peace rather than continuing violence.
“For Afghans to truly reconcile, the Taliban must begin to demonstrate a genuine commitment to peace rather than continue the violence and destruction that causes such inordinate harm to the Afghan people and the future of their country,” the statement added.
Meanwhile, US Ambassador in Kabul John Bass said on Twitter he had heard reports that the National Procurement Authority of Afghanistan won’t authorize fuel purchases for the power plant providing the only electricity in Kabul – “even while the US and Resolute Support help Afghan security forces enable reparis to power transmission lines.”
Tags:
US condemns recent Taliban attacks as 'blatant disregard' for people and institutions of Afghanistan
Source : Afghan Voice Agency(AVA)
Wednesday 18 September 2019 15:35
Story Code: 191762 Copy text available
Featured news
Time to move past ‘conspiracy theories’ and work together: Abdullah
Public Schools to Reopen Gates by Next Week
Pakistan Opens All Khyber Pakhtunkhwa Border Terminals With Afghanistan For Pedestrians
Islamic Ideology Council to recommend CII-like body for Afghanistan
Trump was ‘absolutely wrong’ to negotiate with Taliban: McMaster
Rahmani Praises Top 3 Passers of National University Entrance Exam
1
Afghan, Pak Officials Discuss Abdullah’s Upcoming Pakistan Trip
2
Political Deputy spoke at the Ministerial Meeting of Foreign Ministers of Landlocked Developing Countries on the sidelines of #UNGA