The state-builder electoral ticket held a campaign rally inside the presidential palace on Wednesday. 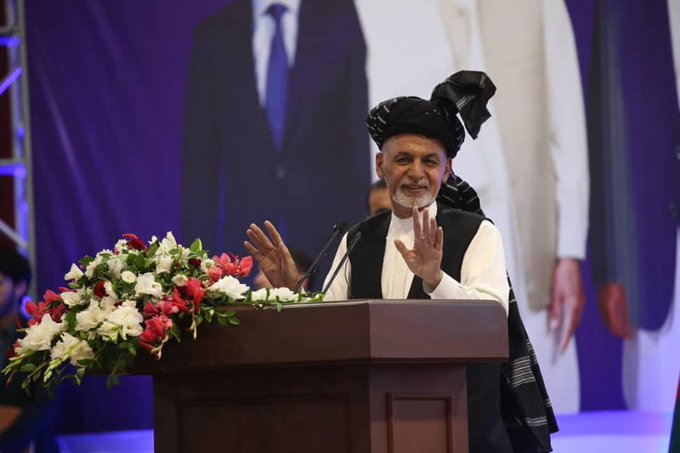 The fortified compound hosted thousands of Ghani’s supporters.
The participants of the gathering entered into the palace through the building of the Administrative Office of the President.
“We entered very easily without any problem,” Ahmad Jan, a participant of the gathering said as a mild music was played at the gathering tent.
“The program is hold in front of the palace. We are here to take part in the electoral campaign of Dr. Ashraf Ghani and Mr. Amrullah Saleh,” said Ziauddin, another participant.
High-ranking government officials such as Imam Mohammad Warimach Deputy Minister of Transport were seen laughing and clapping at the campaign.
President Ghani appeared at the gathering and called on his supporters to accompany him until he could win a second term on September 28 poll.
“We have a regular program [for peace]. Make me the winner on September 28. I will launch a strong peace effort on 29,” he said.
Rival candidates have always accused President Ghani of misusing from government resources.
Meanwhile, Zuhra Bayan Shinwari, the Head of Independent Electoral Complaints Commission (IECC) vowed to investigate all electoral violations equally without any candidate being an exception.
Tags:
Ghani Holds Campaign Rally Inside Presidential Palace
Source : ariananews
Wednesday 18 September 2019 18:46
Story Code: 191778 Copy text available
Featured news
Time to move past ‘conspiracy theories’ and work together: Abdullah
Public Schools to Reopen Gates by Next Week
Pakistan Opens All Khyber Pakhtunkhwa Border Terminals With Afghanistan For Pedestrians
Islamic Ideology Council to recommend CII-like body for Afghanistan
Trump was ‘absolutely wrong’ to negotiate with Taliban: McMaster
Rahmani Praises Top 3 Passers of National University Entrance Exam
1
Afghan, Pak Officials Discuss Abdullah’s Upcoming Pakistan Trip
2
Political Deputy spoke at the Ministerial Meeting of Foreign Ministers of Landlocked Developing Countries on the sidelines of #UNGA