Former commander of US forces in Afghanistan, General David Petraeus, in a joint article with Vance Serchuk, an adjunct senior fellow at the Center for a New American Security, published an op-ed in the Washington Post on November 14 claiming that the Taliban have “strong” links with Al-Qaeda, and recommended that any peace deal with the insurgent group should require their “unequivocal break with international terrorism.” 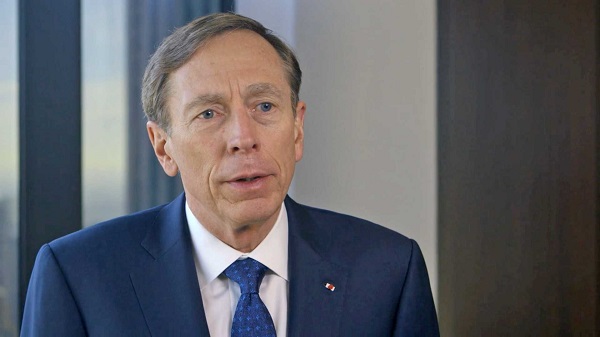 Cutting ties to terrorist groups was one of the issues agreed upon in the previous US-Taliban peace talks in Doha, but Petraeus and Serchuk cite “the experience of recent coalition military operations in Afghanistan” to argue that “al-Qaeda’s links to the Taliban remain strong.”
The authors state that “the Taliban as recently as this summer still wouldn’t admit that al-Qaeda was the 9/11 perpetrator.”
Furthermore, according to the authors, the Taliban should not only break ties with terrorist groups, but they should “show a willingness to fight them.”
Petraeus and Serchuk suggest that a new peace deal should require a nationwide ceasefire, and the withdrawal of US forces should not even be offered as a consideration. The authors suggest that a troop withdrawal would amount to “exchanging America’s military footprint in Afghanistan for Taliban commitments against al-Qaeda,” and would be “especially ill-considered.”
This comes amid attempts to restart peace talks with a proposed swap of Haqqani Network members for two Taliban-held Western professors.
President Ghani announced on Tuesday that Anas Haqqani, Mali Khan, and Hafiz Rashid would be released “conditionally,” but the swap has been postponed and sources say the three prisoners have been returned to Bagram prison.
A number of Kabul residents gathered to protest their release on Friday.
“With the release of Anas Haqqani, the Afghan government has proven its slavery,” Selay Ghafar, member of the Solidarity Party of Afghanistan.
The decision to release the three members of the Haqqani network was strongly criticized by the Afghanistan Independent Human Rights Commission (AIHRC).
“Unless justice, accountability and the rule of law are taken into account, then peace cannot be fair and endorsed by the Afghan people,” said Zabihullah Farhang, media director of AIHRC.
Taliban spokesman Zabihullah Mujahid, on the other hand, says they will not release two US university professors unless Anas Haqqani, Mali Khan, and Hafiz Rashid are released.
“So far, the necessary trust between the Americans and the Taliban has not developed and this could be one of the reasons,” said Abdulrahman Wardak, Afghan parliament member.