International energy news providers say Iran’s announcement that the country is still selling its oil despite US sanctions is not without foundation. 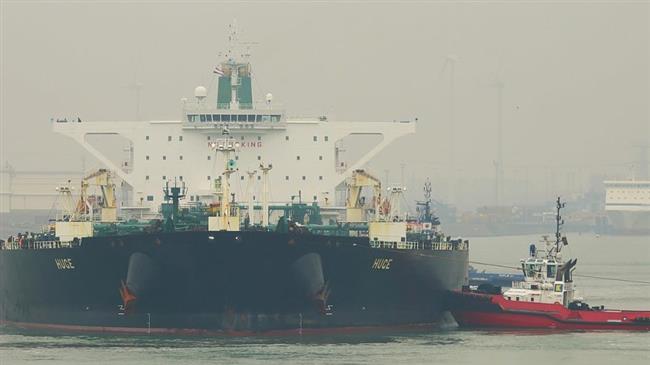 Since September, the United States has been working to bring Iran’s oil exports down to zero as part of Washington’s “maximum pressure” on Tehran.
But Iran’s Vice President Es’haq Jahangiri asserted on Monday that the policy has failed because the Islamic Republic continues to send its oil to the market.
“Despite America’s pressure and its imposed sanctions on our oil exports, we still continue to sell our oil by using other means when even friendly countries have stopped purchasing our crude fearing America’s penalties,” Jahangiri was quoted as saying.
Iran's oil industry, including its oil, gas and petrochemical sectors, is on the frontline of the fight against the US which believes choking off the main source of income of the Iranians would force the country to negotiate a new nuclear deal.
Good news or bad news?
US Secretary of State Mike Pompeo claimed on Monday that the sanctions on Tehran had been effective, resulting in a decrease in Iran’s wealth and diminished ability to trade with the rest of the world.
“The good news is, in spite of what the world told President Trump - that American sanctions would not work - the world was wrong. The sanctions have been incredibly effective,” Pompeo said.
There is little ground, however, to believe in the top US diplomat’s celebratory words.
Tehran has rejected talks with the United States unless it returns to the nuclear deal and lifts all sanctions. There is not the slightest sign of a change in this position, especially after Leader of the Islamic Republic Ayatollah Seyyed Ali Khamenei renewed last month a ban on negotiation with the United States.

Pompeo is apparently encouraged by the recent protests in Iran against the government’s decision to hike gasoline prices. If so, US leaders must be reading too much into the unrest which provided a catalyst to the overall thinking of the Iranians - they loathe and renounce chaos and internal conflict.
That must explain the quick fizzling of the agitation after peaceful protesters separated their ranks from the rioters who were targeting public and private property without discretion.
And that is why the recent protests in Iran must be bad news for American leaders who have thought increased pressure on Iranian would drive them into revolt and mutiny against the government.
Iran has years of experience dealing with sanctions and is confident it can ride out the economic pain. Iranian officials say the country has weathered the worst of the storm from the US reimposition of sanctions.
They have said the country will continue to sell its oil no matter what, an assertion reiterated Monday by Vice President Jahangiri who said the Americans were on the wrong footing.
"They have failed to bring our oil exports to zero as planned,” Jahangiri said.
Tankertrackers: Iran selling 700,000 bpd
Digital marine vessel tracking agency Tankertrackers.com agreed, saying Iran’s claims that it is managing to sell significant levels of crude are not without foundation.
According to Berlin-based business publication bne IntelliNews, Iran has very much moved its oil sales into the grey market to avoid US sanctions, meaning analysts partly rely on satellite-technology tracking firms to observe the ebb and flow of tankers leaving Iran’s ports and watch their movements.
“Lately, Iran’s two main destinations for its crude oil have been China and Syria. In addition to that, refined products ‘bounce’ via certain trading hubs as they cannot be chemically traced,” Samir Madani, CEO of Tankertrackers.com, told the publication.
“All in all, crude plus products are being shipped at a rate of around 700,000 barrels per day,” he said.
Senior US officials have already said Chinese companies continuing oil purchases from Iran are seriously worrying the White House.

The US government has warned shipping companies, energy companies and port officials to shun trade in Iranian oil, or face sanctions.
China has dismissed the sanctions, saying they amount to "bullying” and has defended its trade with Iran as legitimate and legal.
US has run out of options
Washington claims the sanctions target the government, but ordinary Iranians are the ones who suffer the most.
Pompeo contradicted US claims when he brazenly told BBC Persian in November 2018 that Iranian officials must listen to Washington "if they want their people to eat".
Iran’s Foreign Minister Mohammad Javad Zarif on Monday made a refrain of the outrageous remarks as he reacted with a broadside to six new European countries joining the INSTEX barter mechanism, which is purported to circumvent the US sanctions.
"Economic Terrorism kills,” Zarif tweeted, referring to the US economic sanctions on Iran. "Pompeo once again admits that US Economic Terrorism on Iran is designed to starve, and in the case of medical supplies, kill our innocent citizens,” he added.
The sanctions have removed many barrels from Iran’s export volumes, but officials say non-oil exports are making up for lost oil sales.
And with not much left to sanction in Iran, observers say Trump and his administration are running out of options on Iran.