Iran’s next responses will be proportionate to what US will do: Defense min.

Hours after Iran’s missile attack on American bases in Iraq, Defense Minister Brigadier General Amir Hatami says Tehran’s next responses to the US assassination of a top Iranian general will be proportionate to what Washington will do. 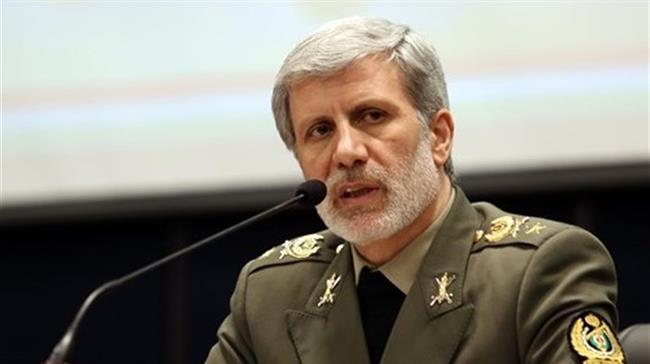 “Our next measure will naturally be proportionate to the ones the Americans will take. Our measures will definitely continue,” the minister told reporters on Wednesday on the sidelines of a cabinet meeting, adding that the early morning strike has given the US a lesson that will be etched in its mind.
The remarks came hours after Iran responded to the US assassination of prominent anti-terror Iranian commander Lieutenant General Qassem Soleimani and Iraqi commander Abu Mahdi al-Muhandis with a barrage of missiles that hit two US bases in Iraq.
The Iranian defense minister said Donald Trump has turned the US government into a terrorist one, as it ordered the assassination of a military official of the Islamic Republic of Iran in a third country where he was a guest of the Baghdad government.
Iran will pursue demands for the expulsion from the region of American forces that have brought about nothing but war, misery and terror for the nations, he added.

Hatami advised world countries to fulfill their responsibilities to condemn the US terror acts, warning that they will not be immune from the adverse repercussions of the US measures should they fail to abhor them.
He also criticized certain countries for supporting the recent US terrorist act against Iran, saying their “bootlicking policies” will get them nowhere.
Army: Iran’s slap to turn into iron first if US repeats mischief
In a statement on Wednesday, the Iranian Army warned the US of a more severe response if it makes another mischief against Iran.
“In case of a new mischief by the enemy, the Iranian nation’s slap will turn into an iron fist,” read part of the statement, saying Iran’s missile attack on American bases in Iraq was just a glimpse of the Islamic Republic’s prowess and might in the face of the criminal and terrorist US.
It said the country reserved the “inalienable right” to give a crushing response to the US measure in line with its doctrine of self-defense.
The Army said defending the Islamic establishment and the Iranian nation is a red line of the Armed Forces, and they will firmly and with full force pursue the goal.
Earlier in the day, Leader of the Islamic Revolution Imam Seyyed Ali Khamenei said Iran’s early Wednesday missile attack on US bases in Iraq following the American assassination of General Soleimani was just “a slap.”
"The talk of revenge and such debates are a different issue. For now, a slap was delivered on their face last night," Imam Khamenei said in remarks broadcast live on national television.
"What is important about confrontation is that the military action as such is not sufficient. What is important is that the seditious American presence in the region must end," he said to chants of "Death to America" by an audience in Tehran.